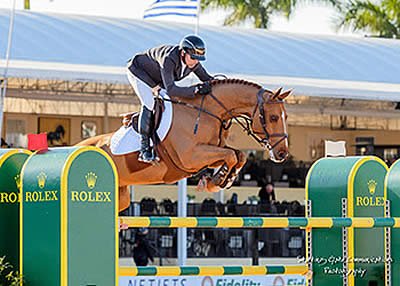 Mexican course designer Oscar Soberon whittled the enormous 109-horse starting field down to nine for the tie-breaking jump-off.  None was faster than Lamaze and Chacco Kid, with the pair stopping the clock in the winning time of 34.68 seconds.  Remarkably, there was a three-way tie for second place as Emanuele Camilli of Italy and Cian O’Connor and Paul O’Shea, both of Ireland, crossed the timers in exactly 36.76 seconds.

Lamaze concluded his 2017 show season by competing at CSI5* events in Paris, France and Geneva, Switzerland in December, before relocating to Florida for the winter season.

“Every year at the start of WEF, I use a horse that is coming off Paris and Geneva; rather than give him a rest, I keep him going and compete with him in Florida as he is already in form,” explained Lamaze, who has won Olympic gold, silver, and bronze medals during his illustrious career.  “For a lot of the riders, their horses have been on a lay-off.  Today’s class was very competitive with 109 starters, but it was nice for Chacco Kid to do a round at a lower height of 1.45m than he was jumping in Paris and Geneva.  When it comes to the jump-off, he has the experience going fast. I know him well, and I don’t mind taking some risks that perhaps a year ago I wasn’t comfortable doing.”

Lamaze welcomed Chacco Kid to his Torrey Pines Stable during the Winter Equestrian Festival two years ago by way of Colombia.  The now 12-year-old Oldenburg gelding (Chacco Blue x Come On) is owned by the Chacco Kid Group, comprised of Sara and Rick Mershad, Carol and Ludi Sollak, and Carlene and Andy Ziegler.

“The development of this horse has been a little backwards,” explained Lamaze of Chacco Kid’s progression since 2016.  “Although he had been ridden by good riders in Colombia, he had never been exposed to big international shows.  He was very inexperienced that way but, with it being an Olympic year, we wanted to save my Olympic horse, Fine Lady 5, as much as possible.  Normally you would have him start out competing at 1.45m, but he ended up doing the big Nations’ Cups in Aachen and Rome, and the grand prix at La Baule, so it went a little backwards.  Now I’m doing what we should have done in the beginning.  He has the biggest heart, and always tries 100 percent.  It is very impressive what this little horse has done.”

While Lamaze is traditionally based in Wellington for the duration of the winter season, his competition schedule is a little different for 2018.

“I will have a different strategy this year as I’m going to do the Rolex show in ‘s-Hertogenbosch, Holland, as well as the Global Champions Tour in Mexico City, which are both in March.  I’m planning my winter season around those two events,” said Lamaze, 49, who splits his time between training bases in Wellington and Brussels, Belgium.  “I did quite a bit of the Global Champions Tour last year, and I really enjoyed being part of the Hamburg Diamonds team with Harrie Smolders, Audrey Coulter, and Jos Verlooy; it was great to be among great riders and enjoy good team spirit.  Of course, we have World Championships to think about this year as well.  You try to target one or two horses towards that, keep competing, and pick the one that is performing the best at the time.”

In the meantime, Lamaze is building on his success by adding more horses to his competition roster.  Last year, Lamaze put together a group of owners to purchase Jewel 8, a nine-year-old Belgian Warmblood mare (Kannan x Indoctro), and continues to strengthen his stable with horsepower.

“We have some promising young horses coming up including Viva, a new mare that I think a lot of,” said Lamaze, who was double clear earlier on Thursday in the 1.45m competition riding Viva.  “I have another new nine-year-old that is spectacular, so we are adding some new horses to our string thanks to the continuing support of Andy and Carlene Ziegler of Artisan Farms, as well as some wonderful new owners who have gotten behind me.  It’s very exciting!”