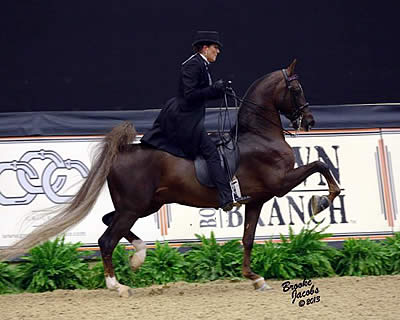 The American Saddlebred and Hackney Divisions, presented by James & Misdee Miller and Elisabeth Goth & Richard Shadwick, took center stage for the second night in the Alltech Arena at the Kentucky Horse Park. Moore started off strong in the Three-Gaited division, claiming her first grand championship of the evening with Sir Silver Knight. While stallions are rare in Three-Gaited competition, Sir Silver Knight has what it takes to stand out.

“He’s very unique,” Moore said. “He’s a beautiful, beautiful animal. People wouldn’t even know that he’s a stallion. He almost looks like a mare in the face. He’s very talented and very game.”

“He’s a powerhouse!” Moore said. “I was actually Reserve World Grand Champion overall with him about three years ago. He changed hands a few times and then he came back to me. He’s just a really grand horse. He’s loads of fun. Don’t let your guard down because you might be off, but he will give you a fabulous ride.”

Moore was happy to have the opportunity to compete at the Alltech National Horse Show and experience its atmosphere and hospitality.

“I think it is so wonderful,” she said. “It’s such a beautiful show. We need to try and do things more like these people do. They definitely, literally, roll out the red carpet. They really do in so many ways.”

“This is my first time at this show, and it was great!” O’Brien said. “The ring is just beautiful and it looked like a good crowd. It was really nice to be here.”

“This is a new pony for me and this is my second drive on him,” she added. “I was very happy with him tonight. I think he loved looking at all the scenery. The ring is so pretty and well decorated.”

The American Saddlebred and Hackney Divisions at the Alltech National Horse Show come to a close on Friday evening, when the Five-Gaited and Three-Gaited Amateur/Juvenile Championships will be decided. The Road Horse to Bike Championship, Fine Harness Amateur Stake and ASB Three-Gaited Show Pleasure Juvenile/Adult Championship are also featured on Friday.