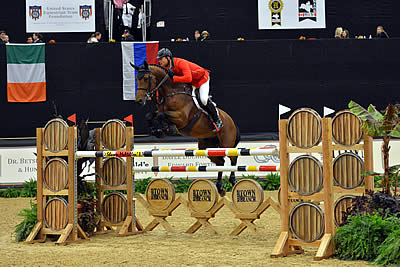 Lexington, KY – October 31, 2013 – Sometimes it is a rail, sometimes it is an inside turn and sometimes it is just one-tenth of a second separating the winner from the losers. That is exactly what happened during the Double H Farm $100,000 International Open Jumpers at the Alltech National Horse Show. Todd Minikus was aiming for his second win in a row with Quality Girl, completing a clear jump-off effort, when Belgium’s Francois Mathy was faultless during the 14-horse jump-off aboard Polinska Des Isles, crossing the finish line a fraction of a second faster to capture the winning honors.

Forty of the world’s top riders gathered at the Alltech Arena to compete during tonight’s feature class. Conrad Homfeld offered challenging questions for the first round, but 14 horse and rider combinations managed to clear the course and advance to the jump-off.

“I think Conrad was probably surprised that he got a couple extra clear, but he truly is a world class course designer,” noted Minikus. “I think he was trying to make it comfortable to get people’s horses going well. A good course designer gets the horses going well during the week and then tests them on the weekend. I think that’s quite a good job.”

Beezie Madden of Cazenovia, NY, was the second to return for the tiebreaker with Abigail Wexner’s Amadora, and she wore a target on her back when she made tidy work of the course and left each rail in place to finish in 44.22 seconds, which would hold up for third place.

After Madden produced a faultless round, Todd Minikus of Loxahatchee, FL, left nothing to chance with his winner from last night’s Taylor Harris $50,000 Open Jumper Welcome Speed, Quality Girl, owned by Chris Brems. The pair was quick over the top of each fence, and they shaved off valuable seconds in each turn to best the clock with a time of 41.51 seconds.

Great Britain’s Tim Gredley was up next with Unex Chamberlain Z, but they would have the most conservative of the double clear efforts in 45.06 seconds for fifth place. Kirsten Coe of Royal Palm Beach, FL, was narrowly faster than Gredley aboard Baronez, owned by Ilan Ferder and Lousta Stuteri. While also leaving each fence in place, the pair broke the beam at 45.01 seconds for fourth place.

The final double clear round in the jump-off proved to be the best of the night. Traveling all the way from Belgium, Francois Mathy’s focus is on Saturday night’s World Cup Qualifier, but tonight he proved that he and Polinska Des Isles, owned by Team Harmony, will be ready for the challenge. They stayed right on Minikus’ track and managed to finish just slightly ahead of his time, dashing across the finish line in 41.42 seconds to capture the victory by just 1/10th of a second.

“To be honest, my mare is really fast, but I really came here in order to get some World Cup points,” admitted Mathy. “I went quite neat; I didn’t think I could beat the time from Todd. It was quite a good surprise when I passed the timer. I didn’t see his round, but I saw yesterday he won by three seconds. He was fast so I didn’t really calculate on beating him and watching his round.”

Mathy had top placings throughout Spruce Meadows with his 10-year-old mare Polinska Des Isles, including a double clear during the Nations Cup, and they also helped the Belgian team place fifth during the 2013 FEI Nations Cup Finals in Barcelona, Spain. After success in North America during the summer and fall, Mathy decided to spend the indoor season in the United States.

“In Europe, it’s quite difficult to get in to the World Cups,” stated Mathy. “I quite enjoyed my tour in North America, and I thought it’d be a good opportunity for me to try and get a few more points. It’s my first time actually doing Indoors in North America so this is quite a nice beginning. I was quite impressed to see the facility here and all of the organization. Everybody’s very welcoming, and I’m really happy I came.”

The National Horse Show Association of America $50,000 International Open Speed, presented by Copernicus and the Coulter Family tested the foot speed of the top mounts over a faults converted track designed by Conrad Homfeld. About midway through the field it looked like young rider Catherine Pasmore had the win in her sights with Vandavid after carefully navigating each obstacle and breaking the beam at a speedy 65.73 seconds.

Unfortunately, Olympian McLain Ward went a few rounds later with his consistent partner Zander. The pair easily left all the rails intact and galloped efficiently through a bending line early in the course, as well as taking the direct route after one of the double combinations. The plan paid off, and they finished in 63.09 seconds to take a commanding lead.

Ward could not breathe a sigh of relief just yet though. The last rider to tackle the course was Meagan Nusz with Vesuvius, and they stayed right on Ward’s tracks. Taking sharp turns and leaving strides out they were on the money and it looked like they could take the win, but Nusz and Vesuvius stopped the clock at 63.95, just tenths of a second away from the lead for the second place prize, while Ward led the victory gallop.

“Meagan gave me a good run, but it went our way tonight,” admitted Ward. “I was lucky to go late. Last night I had to go very early. Tonight I had a better draw. He has a really big stride, so I was able to leave out a couple of places, and he is a pretty quick horse.”

At just 9 years old with multiple wins to his name, Ward is excited about Zander’s future. “This is Zander’s first time Indoors,” he explained. “He jumped the Grand Prix in Washington last week, and he was good, but a little green. We have been kind of moving him up and down in the shows a little bit. This is a unique show because you have two very big speed classes, and one really big one. With the prize money being as good as it is, this probably wouldn’t be his normal class of the show, but the standards are high and it is good for the horse to learn to do that. I think he is going to be a big top, top horse, he’s almost there.”

Earlier in the day, the jumper action kicked off with the Deeridge Farm $10,000 Junior Jumper Welcome Stake. Eight combinations traversed the track without fault, but it was Victoria Colvin of Loxahatchee, FL, who proved to have the key to winning aboard her own Monsieur Du Reverdy. After competing in last week’s WIHS Equitation Classic, they transitioned back to the jumper ring, and Colvin utilized her mount’s improved rideability to best the track in 61.967 seconds and led the victory gallop.

“He was turning and not jumping as high as usual because we needed to make him ride like a hunter for the equitation,” explained Colvin. “I think he made up time by going forward over the jumps and he turned really fast. I’ve never won a jumper class here, so it’s pretty nice to have won the first one. After doing the equitation I wasn’t sure if he would clear the fences, but he did! It was amazing.”

Katherine Strauss was the last to show with her veteran partner Chellando Z, and although they carefully left strides out and left each rail in place, they fell two seconds short of Colvin’s time in 63.465 seconds for the second place honors. Kalvin Dobbs and Winde, owned by Treesdale Farms, were two seconds slower than Strauss, stopping the clock at 65.145 seconds for third place during the speed class. Charlotte Jacobs and Kachina, owned by Deeridge Farms, rounded out the top four with a clear round in 65.600 seconds.

The Chansonette Farm $10,000 Amateur-Owner Jumper Welcome Stake was up next, and the riders showed over the same speed course to determine the winning combination. Adrienne Sternlicht and Quidam MB set the bar very high midway through the class, easily clearing all of the obstacles and tripping the timers at 66.597 seconds to go to the top of the leader board.

Melissa Rundershuasen entered the Alltech Arena next with Gunner, and while it looked like they might take the lead, 1/10th of a second separated them from Sternlicht as they stopped the clock at 66.656 seconds for the second place honors. Katie Dinan was the last to show with the Grant Road Partners’ Vancouver, but they also fell just shy of Stenlicht with a faultless round in 67.211 seconds to round out the top three and seal Sternlicht’s victory.

“Since there weren’t that many options in the course, I tried to shave off my turns and keep a galloping pace through the course and everything came up really nicely,” smiled Sternlicht. “I thought the course was technical for a speed, but it should be because this is a prestigious show. Quidam MB is only 8 years old, and this is his first show inside. I am a bit green to showing inside, as well, and I haven’t been to Kentucky since I did the ponies. Overall it was a really great experience and I am really proud of him.”

Tomorrow’s highlight events at the 2013 Alltech National Horse Show, 130th edition, will include each of the $15,000 Amateur-Owner and Junior Jumper classes, The Triumph Project $50,000 International Open Jumper Speed class, and the LIFEFORCE Elite $50,000 International Open Jumper Puissance. The weekend will wrap up with the Alltech $250,000 World Cup Qualifying Grand Prix presented by Lifeforce on Saturday night, and the ASPCA Alfred B. Maclay National Championships on Sunday.