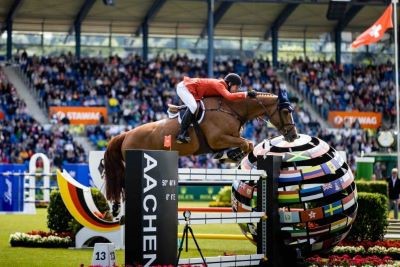 Fifty of the world’s best show jumpers and their equine partners contested Friday’s feature jumping class – the RWE Prize of North Rhine-Westphalia – in front of an excited and enthusiastic crowd, which would serve as the final opportunity for riders to qualify for Sunday’s Rolex Grand Prix, one of the four Majors which comprises the Rolex Grand Slam of Show Jumping.

Sixteen combinations eventually navigated the first round fault-free, advancing to the jump-off, which would be contested over a shorter eight-obstacle, but no less demanding, course. The first five riders to go, including Ireland’s Conor Swail and Germany’s Jana Wargers, each picked up one fault; however, sixth to go, Frenchman Nicolas Delmotte, soon broke the trend, going double clear in 42.95 seconds. Delmotte’s clear was shortly emulated by Germany’s Christian Kukuk and Jur Vrieling of The Netherlands, with the latter crossing the line in 42.79 seconds to temporarily take top spot. Vrieling’s lead, however, was short-lived, with current world number 29-ranked rider Steve Guerdat knocking over four tenths off his time.

With two riders to go, including Dutchman Harrie Smolders and McLain Ward from the USA, Guerdat faced an anxious wait, hoping his time would be unbeatable. However, Wednesday’s winner of the Turkish Airlines-Prize of Europe, McLain Ward, and his consistent partner, Contagious, soon demonstrated their harmony and class, knocking Guerdat off top spot, crossing the line in 41.70 seconds to claim the honours.

Delighted with his second win in as many days aboard his 13-year-old chestnut gelding, Ward commented: “I think he’s [Contagious] on really good form and we’re aiming him towards the World Championships; it’s one of the reasons we had this week planned for him, so we’ll stick to our plan and hopefully be able to be in the mix.”

On his partner for Sunday’s Rolex Grand Prix, Ward said: “It’s always nice to have a good week, as it gives you confidence. It makes you take a breath and focus. Azur [HH Azur] is older now and I know her very well; she’s my old friend. We’ll just do what we do. I don’t think today or Wednesday has much to do with what’s going to happen on Sunday. We’ll just focus and do the best job we can on the day.”