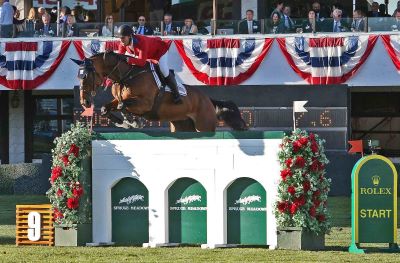 No fewer than 49 horse and rider combinations, including four of the world’s current top-10-ranked riders, contested the highlight class of day two of the CSIO5* Spruce Meadows ‘Masters’, the 1.60m Tourmaline Oil Cup. Venezuelan course designer Leopoldo Palacios appeared to have set a tough task, with many of the world’s leading riders unable to negotiate the 12-obstacle course fault-free and progress to the jump-off. However, much to the delight of the International Ring’s crowd, a small flurry of partnerships bucked the trend towards the end of the class, thereby setting up a scintillating six-horse jump-off, which was later reduced to four after Daniel Bluman from Israel with Ladriano Z and third placed in the Rolex Grand Prix at CHIO Aachen, Nicola Philippaerts with Katanga v/h Dingeshof ,decided not to compete.

The four duos contesting the final show-down included American McLain Ward and HH Azur, Rolex Grand Slam of Show Jumping champion Scott Brash and Hello Jefferson, Daniel Deusser from Germany and his 11-year-old stallion, Bingo Ste Hermelle, and Harrie Smolders and his superstar stallion Darry Lou, who knows this arena better than most, having triumphed here in the CP ‘International’ in 2019 with previous partner Beezie Madden.

An eight-fence jump-off awaited the four pairs with Scott Brash first to go, who notched up a double clear in 45.92 seconds. He was followed by McLain Ward, who stormed around the course without a fault, beating Brash’s time by over five seconds. That left Deusser and Smolders, who both went clear, but neither were able to better the American’s unassailable lead, with the German slotting into second place and the Dutchman finishing third.

Thrilled with his win and his 16-year-old mare, McLain Ward commented: “Horses understand the importance and the energy differently than we do. I think these great horses sense the atmosphere and want to do well and want to please and want to rise to the occasion. She walks up to the gate today and she raises her head, her eyes are right on the arena, ears pricked — this horse is pulling me in to go and do the job, so she understands it in some ways for sure.”

Looking ahead to Sunday’s CP ‘International’ and how he will prepare himself, Ward said: “I have enough experience now. I just try to focus on my job and believing in our plan and believing in the horse, and you need a bit of good fortune also.”