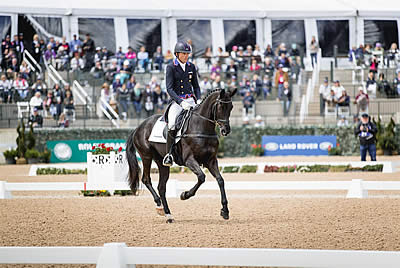 Boyd Martin and Tsetserleg (Photo by Alex Banks for US Equestrian)

Lexington, Ky. – In front of a home crowd of over 11,600 spectators, Boyd Martin and Tsetserleg earned a 27.9 after their dressage test to launch them into first place in the Land Rover/USEF CCI5* Eventing National Championship presented by MARS EQUESTRIAN as the leading U.S. combination at the Land Rover Kentucky Three-Day Event presented by MARS EQUESTRIAN (LRK3DE). Sitting third overall, Martin sits behind a duo of riders from Great Britain, Piggy French and Quarrycrest Echo in second on a score of 27.1 and LRK3DE defending champions Oliver Townend and Cooley Master Class in first on a score of 24.1.

With both the LRK3DE and CCI5* national championship titles on the line, U.S. combination Liz Halliday-Sharp and Deniro Z, The Deniro Syndicate and Ocala Horse Properties’ 11-year-old Dutch Warmblood gelding, head into cross-country sitting tied for fifth overall and second in the national championship after their Thursday dressage score of 30.9. Phillip Dutton (West Grove, Pa.) and Z, an 11-year-old Zangersheide gelding owned by Thomas Tierney, Simon Roosevelt, Suzanne Lacy, Ann Jones, and Caroline Moran, sit seventh overall and third in the national championship after finishing on a score of 31.7 after dressage.

Boyd Martin (Cochranville, Pa.) and his FEI World Equestrian Games™ (WEG) Tryon 2018 mount, Tsetserleg, a 12-year-old Trakehner gelding owned by Christine Turner, put in a stellar test as the third-to-last combination to finish out the dressage phase at the Kentucky Horse Park.

“I was happy with my bloke,” said Martin. “[Tsetserleg] put in a good test. Dressage is a frustrating sport because you can always look back on it and wish you did this a little bit better, or wish you did that a little bit better, but he is getting better and better. Last year, he was very green here and sort of scraped through all three phases. This year, he is a bit more seasoned and confirmed at this level. He has been working really, really well. He is a very quiet horse and relaxed. … I am really looking forward to tomorrow. It should be really fun.

“I think this is our third year together,” continued Martin. “It takes about two years to form a partnership. Last year, it was probably a little bit of a rush, getting through [LRK3DE] and then to the [WEG Tryon 2018]. It sort of felt like we were doing everything on a wish and a prayer, but it has been good just taking a bit of a moment to get to know each other well. He is a little bit of a quirky horse and we have had a bit of time now to figure each other out. … It is wonderful having a horse that tries his guts out.”

Martin and Tsetserleg will be nearly the last combination to leave the start box on Saturday. However, Liz Halliday-Sharp and Deniro Z will start third on cross-country, following fellow American combinations Caroline Martin and Islandwood Captain Jack and Buck Davidson and Park Trader.

“I am very, very early on. I am third to go, so it is going be an occasion [where] I don’t get to watch any,” said Halliday-Sharp. “I’ve just got to make my own plan and stick to it, which actually suits me and [Deniro Z] anyway. I know him well and I think it is a strong track. I think Derek [di Grazia] builds a cross-country course that encourages bold riding. It is a good galloping course, which I hope will suit Deniro [Z]. There is a lot to do in the later part of the course. I think that is one of the biggest challenges – [the course] is sort of busy in that last minute and a half. … It will take a fit horse. I think the challenge is there and we just have to work hard and battle through it.”

Visit the LRK3DE website for updated ride times, schedule of events, and scoring.