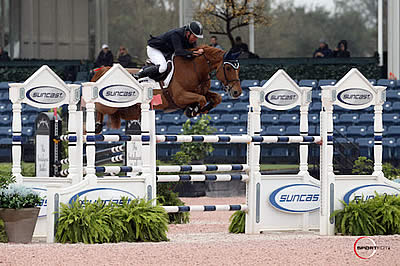 Wellington, FL – January 29, 2017 – It was a win on the final day for Markus Beerbaum (GER) and Tequila de Lile in the $35,000 Suncast® 1.50m Championship Jumper Classic during week three of the 2017 Winter Equestrian Festival (WEF), sponsored by Adequan®, at the Palm Beach International Equestrian Center (PBIEC) in Wellington, FL.

Kent Farrington (USA) took the lead in 39.69 seconds riding his own and Robin Parsky’s Gazelle, but the best was yet to come, as Beerbaum and Tequila de Lile crossed the timers one 1/100th of a second faster to take the win in 39.68 seconds.

Remarking on the fraction of time that separated his round from Farrington’s, Beerbaum admitted, “That was lucky! I thought I gave it away, because after the double combination I added a stride. I did seven because I did not have the feeling that she was moving forward enough coming out, but actually my start was very quick, and my finish also. I had a really short turn to the second to last, so I got it by that little fraction.”

Tequila de Lile, a 10-year-old Selle Francais mare (Luccianno x Etna Paulelle) owned by Artemis Equestrian Farm, began with Beerbaum in 2014. The European Championships and World Equestrian Games team gold medalist began developing the mare as a seven-year-old and feels that she is now stepping up to the next level.

“It is a fantastic mare,” Beerbaum described. “She is extremely careful; that is why we have taken our time with her. She is ten now, and she is just getting in her prime. She has won a few two-star grand prixs, and she got a ribbon here in last week’s grand prix. This week I did not qualify for Saturday night, so I decided to put her in today, and she feels fantastic and ready to do bigger things.”

The Beerbaums are keeping it all in the family, as Markus’s wife, Meredith Michaels-Beerbaum, also won the $35,000 Suncast® 1.50m Championship Jumper Classic just one week ago riding her young mare Daisy. Michaels-Beerbaum, who earned a team bronze medal at this summer’s Olympic Games, also finished second in Saturday night’s $130,000 Adequan® Grand Prix CSI 3* with Comanche 28.

“That is fun,” said Beerbaum of their back-to-back victories. “We have a very good group of horses right now, which we have produced over the last few years here actually. They have all been here at the Winter Equestrian Festival numerous times, and now they are all ready to play and show. We had a great two weeks to start. I hope we can keep the ball rolling.”

On Sunday morning, Sophie Gochman of Palm Beach, FL captured both the championship and reserve honors in the Small Junior Hunters 15 & Under. She rode Dominik to the champion title and Mythical to reserve. Both horses are owned by Gochman Sport Horses LLC. Aboard Dominik, Gochman won the stake, handy, and under saddle classes, and earned second and fifth places over fences.

Dominik is a nine-year-old Warmblood gelding that Gochman has ridden for the past year. During the 2016 show season, Scott Stewart also showed the gelding in in the Second Year Green Hunter division.

“He’s very sweet and likes a lot of attention and treats,” Gochman said. “He really loves showing and always tries his best. I always have such a great time on him.”

Mythical, a 13-year-old Westphalian gelding by Cornet Obolensky, has been in the Gochman family for several years now. Sophie Gochman’s mother, Becky Gochman, previously showed him in the Amateur-Owner Hunters before giving the ride to Sophie two years ago. Gochman navigated Mythical to first and second place finishes over fences, second place in the stake, fourth place in the handy, and third place under saddle.

“He’s like a little teddy bear,” said Gochman. “If Mythical is lying down in his stall, I can go and lay on top of him. My mother and I have both had a lot of fun on him. He’s a great family horse.”

Gochman has been coming to the Winter Equestrian Festival (WEF) for eight years now and enjoys the opportunity to encounter riders from all over world here at WEF.

“There are so many people, so many international riders. It’s really great because you get to see all these different cultures and the different styles of riding,” Gochman detailed.

The 2017 Winter Equestrian Festival continues with its fourth week of competition, sponsored by Ariat®, on February 1-5, 2017. The week’s highlights include the $35,000 Ruby et Violette WEF Challenge Cup Round 4 on Thursday, February 2, the $35,000 Suncast® 1.50m Championship Jumper Classic and Great Charity Challenge, presented by Fidelity Investments®, on Saturday, February 4, as well as the $216,000 Ariat® Grand Prix CSI 4* on the grass field at Equestrian Village at PBIEC on Sunday, February 5, at 3 p.m. For full results and more information, please visit www.PBIEC.com.