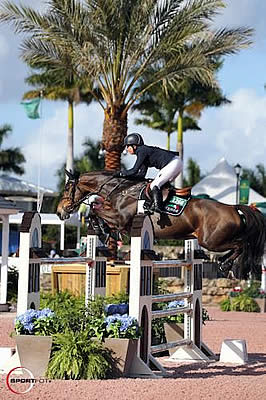 “She was great. I am really pleased with her,” Kraut said of the 13-year-old Dutch Warmblood mare (Solitair x Contango). “It is nice sometimes to drop her down to a lower class and let her gallop and have fun.”

Detailing each of her rounds, Kraut stated, “I went early on Confu, and I know where I got beat with him. After the liverpool, with the rollback to the black oxer, I ended up having to wait for one more stride, which just slowed me up enough to be beaten. So I knew that if I could go in and get going with Nouvelle, and just make sure that I kept coming forward through that turn, then I could hopefully beat my time and Richie’s.”

With a nice win midway through the winter circuit, Nouvelle will continue to jump the next few weeks.

“We are being pretty conservative with the horses down here this winter. We have a big year ahead of us, so I will just pick and choose what I think is good and keep her happy and sound,” Kraut concluded.

The USHJA National Hunter Derby finished on Friday with Amy Momrow of Wellington, FL topping the open section aboard Curb Appeal and Nicole Lyvere of Lakewood, CO winning the junior/amateur section riding Certainty. The open section saw 24 first round competitors, while 27 juniors and amateurs contested for the first place honors. The top twelve scores in the first round of each section returned for a second round handy trip.

Momrow has ridden Monty Kelly’s Curb Appeal, a coming seven-year-old Dutch Warmblood gelding by Unaniem, since he was imported in 2014. The pair earned a first round score of 89 and a second round score of 92 for an overall total of 181. Curb Appeal was also presented with the Champion Equine Insurance Hunter Style Award by Laura Fetterman.

“He really stepped it up in the handy round,” Momrow stated. “He was super in the first round, but he got a little green in places and had a couple spots where you could tell his age and experience level. He really excels in the derbies because he loves something a little more interesting and different than the normal hunter tracks. Ever since day one, he’s had a winning attitude and just wants to please.”

Lyvere piloted her own Certainty to scores of 90 in the first round and an 89 in the second round for an overall total of 179. Lyvere rides the eight-year-old Oldenburg gelding by Hoftanz in the Amateur-Owner Hunters, and the pair has been partnered together since 2014.

“I’ve had a lot of ups and downs with him,” Lyvere detailed. “Over the last nine months everything has finally come together, which makes this win more exciting than if things have gone smoothly. He used to get really nervous in the ring and just when we’d start going well, he’d get a minor injury and we’d have to start over. He’s so sensitive, but I’ve taken it upon myself to make a really strong bond with him and it’s helped in the ring.”

The Adult Amateur Hunter 18-35 Section A division awarded championship honors to Cathleen Driscoll of Wellington, FL and Good Times. The pair won two over fences classes, placed second in another, and second under saddle. Driscoll enjoys working with young horses and has worked with Good Times since he was a three-year-old.

“This is my first year here at WEF, and it’s a big transition,” Driscoll explained. “I’m really happy he settled in well and had a really good week. I got him as a three-year-old in Europe and have done all the training on him. It’s really nice to get results on a horse you’ve brought up yourself. I’ve just tried to take it slowly, one step at a time, and it really paid off this weekend.”

Week seven of the 2017 Winter Equestrian Festival continues on Saturday, featuring the $380,000 Suncast® Grand Prix CSI 5* in the International Arena in the evening. The THIS Children’s Medal 14 & Under will award a winner in the South Ring in the morning. For full results, please visit www.PBIEC.com.