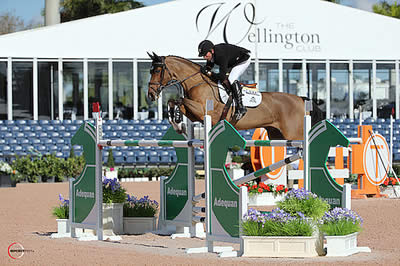 Course designer Leopoldo Palacios (VEN) set the track for Thursday’s WEF Challenge Cup with 74 entries in total and eight in the jump-off. Five jumped clear over the short course, where Lamaze and Fine Lady 5 blazed through the course to win.

Richie Moloney (IRL) and Equinimity LLC’s Carrabis Z was the first pair to clear the short course in 44.09 second and finished fifth. Meredith Michaels-Beerbaum (GER) and Artemis Equestrian Farm LLC’s Fibonacci 17 then flew to third place in 36.41 seconds. Lamaze and Fine Lady 5 went next to take their victory in 35.28 seconds. Alex Granato (USA) and Wood Run Farms’ Mullaghdrin Rado were close to the mark in 35.81 seconds to finish second, and Christine McCrea (USA) and Candy Tribble’s Zerly wrapped things up with the fourth place round in 38.85 seconds.

Lamaze has been on fire since the start of the WEF circuit and thanked his many talented horses and the great ownership of the Ziegler family’s Artisan Farms for his continued success this week.

“You don’t expect to win three WEF (Challenge Cup classes) in a row, even if you feel your horses are on form,” Lamaze admitted. “There were 74 starters and some of the best riders in the world and the best horses. It comes down to having a fast horse.”

“This was sort of her debut,” Lamaze said of Fine Lady 5. “I did a few smaller classes the week before just to get her ready for this week. She is a class horse, and I am really happy that the Zieglers bought her for me. Not only was I in need of a great speed horse, but she is so much more than just that. I am really lucky to have a horse like that.”

Commenting on his winning round, Lamaze detailed, “Meredith was very quick actually and with Chris McCrea behind me, I thought that I really had to go, but I would not have done it any other way. She (Fine Lady 5) loves it. She loves to be competitive. I talked with Yann (Candele) before I went in, and he said it had not been so fast. I said, ‘I’m going. I hate it halfway. If I have one down, I will be the fastest four faulter, but I’m going.'”

In the past three years, Lamaze has been slowly building up his string of horses, and acknowledged that he would not be where he is without great owners.

“It hasn’t been as easy as it may look now,” he stated. “It for sure took a lot of time to rebuild a good string of horses. There were a few mistakes along the way, but when you have great owners that support you and stay with you, success will come. The Ziegler family, Artisan Farms – they did that. It has been a long process, so this is the payoff. They are very competitive horses.”

In addition to the winning portion of prize money, Lamaze was awarded the $3,000 SSG Gloves “Go Clean for the Green” bonus for the third week in a row. Each week of the WEF Challenge Cup Series, a $3,000 bonus will be awarded to the winning rider if they are wearing SSG ‘Digital’ Riding Gloves in all rounds of competition with the SSG logo clearly visible. Lamaze has now won all three bonuses, totaling $9,000 in additional money earned.

Peter Pletcher and Thanks for the Gold kicked off hunter action for WEF 3 in the Shapley’s Grooming Products Green Conformation Hunters. Thanks for the Gold, owned by Rancho De Los Arboles of Oak Point, TX, topped two of the over fences classes, along with the model and under saddle, to finish the day as champions.

Also turning in consistent performances over the two days were Having Said That ridden by Kelley Farmer. The combination had a first, two seconds, and third over fences, paired with a second in the under saddle. With high ribbons both days, Glefke and Kensel’s horse, Having Said That, finished as reserve champion in the division.

Thanks for the Gold is an eight-year-old Hanoverian stallion that has been under the training of Pletcher for the past year. When Pletcher first started riding Thanks for the Gold, he competed in 3’3″ hunter classes and focused on putting good training on the horse. “Middle way to the end of last year he [Thanks for the Gold] started winning a lot in the 3’3″ Performance Hunters, and I was excited to come and try the 3’6″ with him,” Pletcher explained.

While complimenting the difficult handy course, Pletcher also commented, “All in all I think the courses have been really great.”

Week three of the 2015 Winter Equestrian Festival continues on Friday with the $34,000 Spy Coast Farm 1.45m speed class featured in the International Arena. The Forre Fine Art Low Adult Amateur Hunter 2’6″ Section A will be featured in the Rost Arena. For full results and more information, please visit www.pbiec.com.