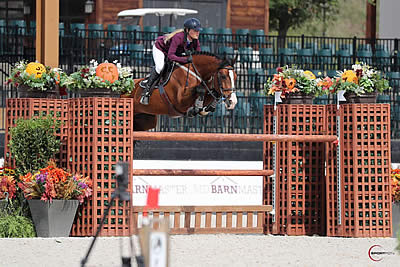 The Catsy Cruz (MEX) course saw 35 entries test the first round, with five returning to test the jump-off track. “The time was a little bit tighter than it’s been all week, which helped get the numbers a little bit smaller in the jump-off. She’s naturally my speed horse, with her natural fast canter, and the time allowed actually suited us quite nicely,” VanderVeen shared. “So, that was great, and then the jump-off was just fun. I just went as fast as I could, and she’s such a fighter in the jump-offs – it’s really her specialty.”

October 2, 2020 – David Matisz (HUN) and M. Holliday came out on top in Friday’s $6,000 Speed Stake CSI 2*, stopping the timers in 70.44 seconds to take the win. In second, Kama Godek (USA) and Stonehenge 5, her own 2011 Hanoverian stallion (Stolzenberg x Kolibri), cleared the course in 70.58 seconds, while third place went to Bliss Heers (USA) and Christos, the 2009 Holsteiner stallion (Christo 5 x Linaro) owned by Bridgeside Farms LLC, after their 74.92 second performance.

The Catsy Cruz (MEX) course design saw 13 pairs in the field, and Matisz chose to compete with the David Matisz LLC owned 2012 Belgian Warmblood gelding (Zilverstar T x Gelha’s VDL Emilion) Friday instead of taking on Saturday’s $73,000 Tryon Resort Grand Prix CSI 2*, he explained. “I thought it was a well-built, nice course. It flowed really nicely. I had a young horse, and just wanted him to have a good experience. I thought he jumped it well, and it was a good experience for both of us. This is his first international horse show, so we didn’t really know what to expect from him this week.”

Torano and the Isalou, Inc. entry, the 2012 Westphalian gelding (Los Angeles x Laskaja), walked up the lines to show off a powerful stride throughout the Dean Rheinheimer (Sheridan, IN) course, he detailed. “There were unrelated distances which were nice for my horse because I was able to gallop along and show him off. There was one line that everybody was riding in eleven or twelve strides, and my horse has a big stride, so I galloped it in ten strides in both rounds,” he recapped. “I think that probably helped with my score.”