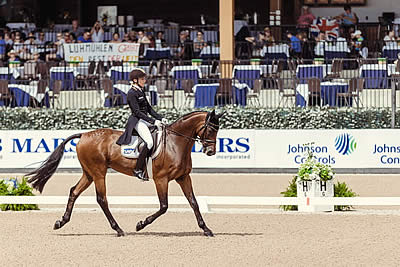 Ingrid Klimke underlined Germany’s extraordinary dominance in dressage as she and mount SAP Hale Bob OLD leapt to within touching distance of compatriot Julia Krajewski at the top of the leaderboard as the first stage of the Mars eventing dressage came to an end at the FEI World Equestrian Games™ Tryon 2018 (WEG).

A beautifully controlled ride in front of a packed house secured the 2017 European individual and reigning Olympic team champion a score of 23.30. It places her second and gives Germany vice-like control of the battle for team gold.

“He was so relaxed, so calm, so concentrated that I could really ride him and was not sitting on a bomb or anything,” Klimke said of 14-year-old SAP Hale Bob OLD, before she attempted to explain just how Germany has mastered the art of dressage.

“You have to be really very precise in your training and do everything very accurately and repeat and repeat.” — Ingrid Klimke (Team Germany)

The nation’s combined score of 73.40 going into the cross country is the highest mark ever recorded at this stage of a FEI World Equestrian Games™ (WEG). Great Britain in second are a significant 7.40 points behind.

The Longines FEI European Championships 2017 team champions were buoyed by a great ride from 32-year-old Rosalind Canter who was so confident in her horse Allstar B that she “gave him the day off yesterday.

“It’s really just my job to make sure I get a mistake-free test from him because he is just so amazing, he never changes,” said Canter, who sits third with a score of 24.60.

France’s Lieutenant Colonel Thibaut Vallette led the rest in a charge as a host of big names gathered behind the top three. Just 2.2 points separates the military man in fourth and Great Britain’s Piggy French in 15th.

It is similarly tight in the team stakes with the USA, who boast three riders inside the top 18, sitting third, less than a point ahead of France in fourth. Ireland secured their best ever start to a WEG – their team total of 87.5 enough to place them seventh and firmly in the hunt for a priceless qualification place for the Tokyo 2020 Olympic Games.

All eyes now turn to the Captain Mark Phillips (GBR) designed cross country course. Rider of the day, Ingrid Klimke, neatly summed up the excitement and anticipation coursing through Tryon 2018.

“There are beautiful jumps out there,” Klimke said. “We can’t wait to get out.”