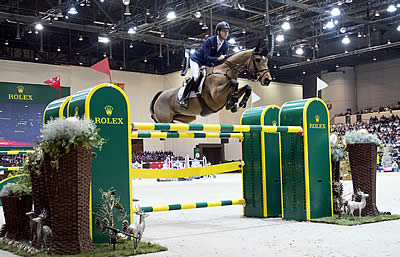 The current top 10 riders in the world gathered at the iconic CHI Geneva, Switzerland to contend for one of the most exciting classes of the year, the Rolex IJRC Top 10 Final. The roster of elite show jumpers who had qualified to tackle Gérard Lachat’s technically challenging and imposing course included five of Rolex’s Equestrian Testimonees: Steve Guerdat, Scott Brash, Eric Lamaze, Kevin Staut and current World Number One, Kent Farrington.

Staged over two rounds, home favourite and Swiss hero Steve Guerdat was first to go aboard his brilliant mare Hannah. The patriotic crowd was electric as he rode into the arena and despite willing the combination over every fence, the pair collected four faults.

The first clear round came from the only rider currently to have won the Rolex Grand Slam of Show Jumping, Great Britain’s Scott Brash. Ursula XII and Brash glided around the first round, setting the bar high for the remaining seven riders. Despite nearly foot perfect rounds from the 2016 reigning champion, Eric Lamaze, and 2015 champion Kent Farrington, they both finished the 12-fence course with four faults, respectively.

For the eighth time in his career, Kevin Staut had qualified for the Top 10 Final and this experience shone through as he delivered the last clear of round one.

The second round welcomed four riders with a clean sheet, Lorenzo De Luca, Harrie Smolders, Scott Brash and Kevin Staut. Rolex Testimonee Eric Lamaze produced the fastest second round of the night, with a time of 40.27 moving him up the leaderboard.

Brash continued to impress and put pressure on his competitors, executing a faultless round with a time of 42.83, putting the passionate crowd on the edge of their seats as they waited for the last three riders of the class to challenge the British rider. It was not to be for Smolders as he attempted too tight a turn and paid the price with four faults. The stage was set for Kevin Staut and Lorenzo De Luca, who was competing in this competition for the very first time and the class’s first Italian representative.

Staut cut every corner in order to achieve his dramatic clear round, stopping the clock at 40.90 seconds, taking him into the lead. After a valiant effort De Luca was unable to beat the exacting precision of the French rider and world number three, as he exited the arena with four faults. The final result saw Rolex Testimonees, Kevin Staut and Scott Brash, secure first and second place on the podium.

A thrilled Staut commented on his victory: “I am really really happy as not only have I won the Rolex IJRC Top 10 Final but I have qualified for the Rolex Grand Prix tomorrow also. It’s been eight years that I’ve been fighting to get a good result and I’m thrilled I’ve now achieved it, especially here in Geneva which is such an incredible show.”

Second placed Brash: “I don’t think I could have done any more. Ursula has a huge stride but is a slow mover. Kevin’s turns were much smoother than mine and Kevin was too fast for us today.”