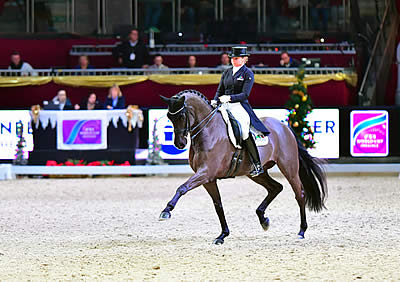 It takes two to tango as every top-class Dressage rider knows, and Dorothee Schneider (48) and her lovely 11-year-old gelding Sammy Davis Jr. nailed it with the harmony they showed in their tango-themed test that won the fourth leg of the FEI World Cup™ Dressage 2017/2018 Western European League at Salzburg in Austria.

“Sammy wants to present himself and he loves to dance, so he’s the perfect Freestyle horse! He’s good-looking with a character to match, and today was our best score so far – it’s exciting because we are coming together as a pair more and more!” — Dorothee Schneider (GER)

In a start-list of 12 combinations from seven countries, Frenchman Ludovic Henry took the lead when posting 75.673 percent with After You when seventh to go, but Schneider and Sammy blew the class wide open when next in, putting 83.415 on the board. “I could feel in the warm-up that he was in really good shape – he’s been doing an amazing job over the last month!” Schneider said of the horse who helped her claim individual 11th spot at this summer’s Longines FEI European Championships in Gothenburg, Sweden.

It was never going to be easy to better that, and although the popular duo of Agnete Kirk Thinggaard and Jojo Az were in sparkling form they didn’t threaten when following with a score of 76.405. Their Danish counterparts, Daniel Bachmann-Andersen and Blue Hors Zack, came a lot closer, however, the talented 27-year-old rider and the 13-year-old KWPN stallion oozing promise of even better to come as they strutted their way to a mark of 80.375.

That moved them into runner-up spot, but they would have to settle for third when the penultimate partnership of Germany’s Jessica von Bredow-Werndl (31) and Unee BB stormed in to post 81.565. This pair has a wonderful record in the FEI World Cup™ Dressage series, and has twice finished third at the Finals, in Lyon (FRA) in 2014 and Las Vegas (USA) in 2015. At 16 years of age, Unee is still flying, and von Bredow-Werndl is very much hoping to make the cut with him to the 2018 Final in Paris, France next April. Each national federation can only send a maximum of three riders, however, and with defending champion, Germany’s Isabell Werth, guaranteed a place once she completes the qualification criteria of two qualifying scores with her chosen horse, the competition between the Germans themselves is intense.

“I’m really fighting for our place at the Final. Even though Unee turns 17 next year, he’s still in top form, so I want us to be there!” von Bredow-Werndl said.

Schneider also has Paris in her sights with Sammy Davis Jr. who only stepped up to Grand Prix level in March of this year and who is clearly coming along in leaps and bounds. However, although she has moved to the top of the leaderboard after the win, she’s not taking qualification for granted. She knows von Bredow-Werndl and Fabienne Lutkemeier are snapping at her heels and that it’s far from done and dusted yet. “Sammy is going to have a rest over Christmas and then maybe we will go to Neumunster (GER) because I want to get Paris too, but it’s not going to be easy!” she said.