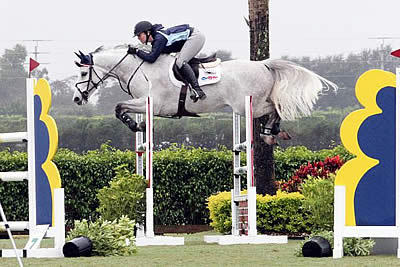 Kama Godek and Air Force One.

Wellington, FL – January 9, 2014 – Kama Godek and Air Force One soared through the jump off in the first event of the Wellington Turf Tour on Wednesday, January 8, 2014. Their finesse through the short track allowed them to surpass 17 contenders in a solid 36 seconds. Their time proved untouchable as each consecutive rider attempted to catch their pace, but Godek’s strong turns and quick pace made it an impossible feat.

Godek is no stranger to The Ridge at Wellington’s Turf Tour. Although this is only the second year that Godek has traveled to Wellington for the winter circuit, she has made the Ridge events a permanent fixture on her show schedule. Last year, Godek navigated Air Force One to several top placings in the event, and she returned to take charge for the 2014 series.

“Air Force One is my grand prix horse. I have done some World Cup Qualifiers with him, and he was the horse of the year in Virginia,” Godek said of her mount. “I gave him the last two months as holiday to go galloping down the canals and relax. I like to keep him interested and keep his job fun. Going every single week to the same ring can get really boring.”

Godek continued, “I wasn’t planning on doing a big class with him this week, so I decided to do him in the classes today and then bring him back on Friday to jump in the 1.40m class. Right now, I am playing around with him, having fun and enjoying the change of scenery. It keeps them more interested in their job when they can see different venues. I have a lot of horses for sale, and being able to put them on the trailer and bring them over to jump around without pouring a lot of money into them is ideal.”

Air Force One proved to be in peak condition as Godek navigated the grey gelding through Pierre Jolicouer’s course. Godek had seen Kevin Babington take the lead only minutes before aboard Shorapur, owned by Shorapur LLC, but Air Force One covered the ground with a quick pace and was right there for Godek as they sliced the turns and beat Babington’s time by a narrow margin of a little over a tenth of a second.

“I didn’t even realize how fast I was going,” Godek smiled. “He is always so fast across the ground that I don’t even have to think about it. As long as I make decent turns, he is always there.”

Babington secured the second place aboard Shorapur, while also snatching the third place with the 10-year-old mare Baloucat.

“It is really nice that they have added more venues. One of the downsides of jumping at the Winter Equestrian Festival (WEF) is that you are jumping in the same ring week in and week out. The horses get a little bored. I think this breaks it up for them,” Babington explained. “The two I brought today – one is an up and coming grand prix horse that I plan on jumping on Friday in the 1.40m Grand Prix, and the other is a sale horse I wanted to get to know.”

The Ridge events are nostalgic for Babington since he rode Shorapur for the first time during the first event of the Wellington Invitational Series in 2013.

“I have really high hopes for Shorapur,” Babington expressed. “I got her at this time last year and moved her up to the grand prix at the end of her 8-year-old year. She is just turning 9 years old now. This year it is time to see what she really is.”

Such positive reviews were heard from other top riders throughout the course of the day, including Chris Kappler, who brought two of his students to compete in the two classes.

“The Ridge’s Wellington Turf Tour has grown to encompass the type of variety riders want here – to be able to get to different venues with young horses, and even older horses. Most of these venues have beautiful grass footing, and you don’t really get that anymore,” Kappler stated. “We are so thankful to these owners for hosting these events. With the way it is being run it works with the horse show and, at the same time, gives you an outlet for doing some different things. I think it is great for the circuit; it helps to break things up and make it so things don’t get too monotonous for everybody, and provides an exceptional experience.”

It was Schuyler Riley, the host of this week’s event, who rode to the victory in the second class of the day. She entered into a three-horse jump off to ride away with the win aboard Navalo De Poheton, owned by Wolfstone Stables & Sales. She jumped to a double clear effort in 33.150 seconds. Godek secured the second place aboard Air Force One with another clean jump off in 33.274 seconds. Liz Mahoney and Carpe Diem rode to the third place with a four-fault jump off round in 48.975 seconds.

Not only was the competition fierce for the opening day of the Wellington Turf Tour, but the hospitality was unparalleled. The Ridge at Wellington hosted a beautiful spread for breakfast and lunch, allowing riders, owners and trainers to take a moment to relax in the tranquil atmosphere.

The course opened at 8 a.m. and remained open until 4:30 p.m., allowing competitors ample time to come at their convenience to ride and enjoy the ambiance of Wolfstone Stables. The $175,000 1.40m Invitational Grand Prix event will return to Wolfstone Stables tomorrow for the first week of competition, and will then make its way to the International Polo Club Palm Beach for Week Two of the Wellington Turf Tour. The 10-week series will culminate with the $24,750 Wellington Turf Tour Invitational Grand Prix Finale on Saturday, March 22, 2014.

Riders have the opportunity to ride over straight from the show grounds, or trailer their horses over while enjoying unparalleled hospitality and quality competition. The Ridge series is the perfect training opportunity to help riders and horses prepare for the classes held at the Winter Equestrian Festival, helping to end the daily grind and prevent complacency throughout the circuit.