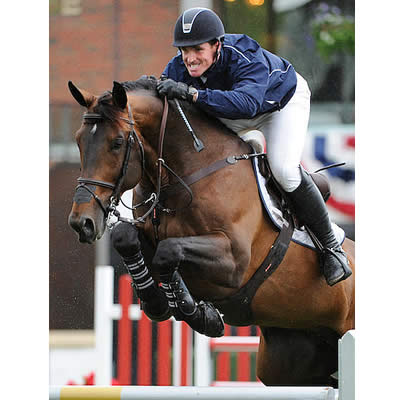 The ‘National’ Tournament is the first in five weeks of competition during this year’s Summer Series at Spruce Meadows. Riders will vie for nearly $1.2 million in prize money throughout the week, with competition concluding on Sunday, June 7. The highlight event will be the $400,000 RBC Grand Prix, presented by Rolex, on Saturday, June 6. Other features include the $85,000 ATB Financial Cup on Thursday, the $60,000 TransCanada Parcours de Chasse on Saturday, and the $210,000 CNOOC Nexen Cup 1.50m Derby on Sunday.

The course designer in the International Ring for the ‘National’ Tournament is Uliano Vezzani of Italy. Vezanni began Wednesday’s competition with the $34,000 Roadtrek Motorhomes Cup 1.55m and a win for Quentin Judge aboard Double H Farm’s HH Copin van de Broy. Judge and the 13-year-old Belgian Warmblood stallion (Darco x Brownboy) topped a 15-horse jump-off out of 65 original starters. They completed the fastest of eight double clear efforts in 37.77 seconds.

“I was surprised we won to be honest because I saw Eric go and I thought he was pretty fast,” Judge remarked. “My original plan was not to try to win. I wanted to be in the top four or five to get qualified for Saturday’s grand prix, but McLain Ward who trains me said, ‘Go,’ so I did. My horse felt really good and really schooled all the way around.”

Egypt’s Sameh el Dahan completed the fastest jump-off round in 37.71 seconds just before Judge entered the ring, but a rail at the last fence put the rider in ninth place overall. Judge was able to watch his round, however, and knew what he had to do.

“I saw Sameh go and I saw that he was really fast to the last line, but I am a little superstitious, so I did not watch him do the last jump,” Judge admitted. “I knew Eric did eight strides from jump one to two. I saw everyone else do nine and I knew that my horse has a similar stride as Powerplay and could also do eight. From there I just tried to be quick to the Roadtrek oxer and back to the coins oxer and the last line. Then I just let him gallop to the last jump. I knew if I was neat enough I could really trust him to the last jump and it worked out.”

“I feel like our partnership has come a long way,” he acknowledged. “We got along pretty well from the beginning, but Spruce Meadows last year was really my first big international show with him, so I know him the best at this venue. The horse obviously likes it here, so I know that day one I can ask him to go and do his job.”

With a win under his belt, Judge has his sights set on Saturday’s grand prix and also looks forward to defending his title in the $210,000 CNOOC Nexen Cup Derby, which he won last year aboard HH Dark de la Hart.

“This win gives me a big confidence boost,” Judge noted. “We all come here to Spruce Meadows trying to be guns loaded and ready to be competitive going into the first week. It gives me confidence that the plan I made coming up to this was right and my horses are ready to go. Having one win earlier in the week takes a little of the weight off my shoulders to be able to concentrate on the weekend.”

The next competition of the day was the $34,000 Back On Track 1.50m, which was held in a one round speed format. Thirteen out of 31 entries cleared the course, and Eric Lamaze completed the fastest clear round in 61.06 seconds for the win aboard Artisan Farms LLC and Torrey Pines Stable’s Rosana du Park.

Just fractions of a second separated the top three, with Conor Swail (IRL) and Ariel and Susan Grange’s Grafton stopping the clock in 61.13 seconds to finish in reserve, and McLain Ward (USA) with Double H Farm’s HH Carlos Z finishing third in 61.60 seconds.

Following his win, along with a second place finish in the first competition of the day, Lamaze commented on the great afternoon that kicked off the ‘National’ Tournament.

“The first day is always an important day,” he stated. “I love doing well here. It is fun. It doesn’t matter if the stands are full or empty; it is still a five-star. You get ranking points and you get good prize money, so I love competing.”

Lamaze and Rosana du Park had a fantastic winter jumping at the Winter Equestrian Festival in Wellington, FL, with multiple wins. The ten-year-old Selle Francais mare (by Kannan) then placed on the Longines Global Champions Tour in Miami and continued on to good results competing in Antwerp and Rome.

“She is super. She is going to be a great horse,” Lamaze noted. “She can do a grand prix and she can do a speed competition. I love those horses. She can do both.”

Although the mare has been jumping very well, Lamaze was careful to put her in the right level to get things started on the grass field this week.

“She is usually very timid here on the grass, so that is why I chose that competition today,” Lamaze explained. “Last year it was too much for her almost; even the 1.45m and 1.50m felt too much. Carly Anthony rode her for me last year and then I took her over a little bit toward the end, but she felt very timid. She was still a fairly green horse that was very careful then. She was really holding herself up, but this year she feels really different. She really handled it beautifully. It is just a year later, more mileage, more everything, so I am very happy.”

International competition concluded on Wednesday with the $34,000 Bantrel Cup, held over a 1.50m speed track, with 46 starters and eight clear rounds. Tenth in the order, Venezuela’s Andres Rodriguez and Arao Enterprises LLC’s Fifty Fifty 111 sped to the lead in 63.92 seconds and held on to the end for their first win in Spruce Meadow’s International Ring.

Conor Swail was the runner up in 64.31 seconds with Susan Grange’s Simba de la Roque. Brazil’s Rodrigo Lambre was first to go and placed third overall with his time of 66.25 seconds riding Mario Onate’s Charielle.

Rodriguez has owned Fifty Fifty 111, a ten-year-old Belgian Warmblood (Action Breaker x Major de la Cour), since the mare was five years old. He purchased the horse from Eric Lamaze and brought her up through the levels. ‘Fifty’ has continued to develop and Rodriguez started the season with the goal of competing her in the derbies at Spruce Meadows this summer. With a win on the field to start the Series, he looks forward to Sunday’s first derby competition.

“I really wanted to win a competition in the big ring this year. We brought ten horses and I brought a few good horses that I thought could do it. To win on the first day is an amazing feeling,” the rider said of his victory. “We have been training for the derby. It is actually going to be my first derby in my career, but we have practiced everything and the way she jumped today, if she keeps jumping like that Sunday might be a great day.”

“She just keeps developing and she keeps surprising me, so why not?” Rodriguez continued. “From that generation of horses born in 2005, I had six horses, and when they were seven we cut down to four. She was not the most talented of all of them, but the one thing she had was that she always wanted to do everything right. There were more talented horses in the pack, but she was always trying to produce clear rounds and she ended up being the best by far.”

Fifty Fifty 111 will now rest up for the derby on Sunday while Rodriguez competes his other top mounts. For the summer overall, his main goal is preparation for the Pan American Games that will qualify teams for the 2016 Olympic Games in Rio.

“You can feel the Pan American ambience in Spruce Meadows right now. Everybody is trying to put their teams together here,” Rodriguez noted. “I think for the first time really the Venezuelan team is working together. We are all on the same page and we are all really trying. We agreed that the best plan was for all of us to go to Spruce Meadows together as a team to try to get our horses comfortable. We knew we were going to have good footing and good courses. It is the best training we can get before we go there. It is very important for us because Venezuela has never jumped as a team in an Olympic Games. For any athlete, the Olympics are as high as you can get, so we are really trying to make that happen.”

Based in Calgary, Canada, Spruce Meadows is the creation of the Southern family who built a Show Jumping complex at the foothills of the Alberta Rocky Mountains. It was in 1976 that the first Spruce Tournaments were held, with annual spectator attendances reaching over 50,000 by the end of the decade. Today, Spruce Meadows boasts one of the greatest outdoor equestrian venues in the world and offers an incredible experience for riders and fans alike. Spruce Meadows focuses on the organization and hosting of show jumping tournaments of unmatched quality for junior, amateur and professional athletes in a manner that reflects basic family values in a clean, green and welcoming environment that celebrates the horse and encourages the breeding and training of quality sport horses and the teaching and development of athletes. For more information on Spruce Meadows, please visit www.sprucemeadows.com.