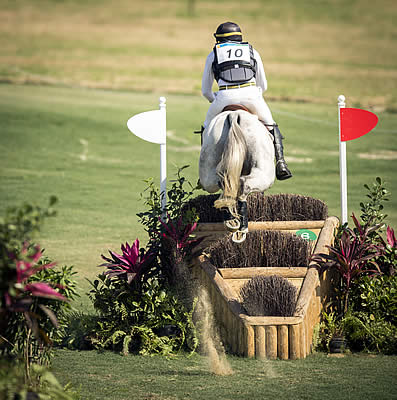 Marcio Jorge (BRA) and Coronel show a clean pair of heels on the way to the overnight lead after cross country at the Aquece Rio International Horse Trials, the Olympic test event at the Deodoro Olympic Equestrian Centre. (FEI/Raphael Macek)

Deodoro Olympic Park (BRA), 8 August 2015 – Marcio Jorge (BRA) and his compatriot Marcelo Tosi still hold the advantage at the Aquece Rio International Horse Trials, but it is Jorge at the head of the field after cross country, not yesterday’s Dressage leader Tosi.

Eight horses were clear around the 20-fence 3.2km course designed by Pierre Michelet, the Frenchman behind the track at last year’s Alltech FEI World Equestrian Games™ in Normandy. Only two came home inside the five minute 41 second optimum time and it is those two – Jorge with his second ride Coronel MCJ and Tosi with Glenfly – who hold all the aces going forward to tomorrow’s final Jumping phase.

Jorge and the grey Coronel flew around the course, stopping the clock on five minutes 34 seconds, 17 seconds inside the time, to complete two days of competition on their Dressage score of 44.5 penalties, but with no fence in hand over Tosi for tomorrow’s Jumping.

The action opened at 10.00 on a blisteringly hot Brazilian winter morning. Jorge was first out on the course with the Thoroughbred Winner, fourth after the Dressage, but the pair slipped down the order to eighth after a runout at the skinny, the second element of the downhill fence 18. That tour of the track was the ideal preparation for Jorge’s second outing, this time with Coronel and the pair were foot-perfect throughout to cruise round in style and take over the lead.

“I’m very happy with both horses,” the Toronto 2015 Pan-American Games team silver medallist said after his second tour of the track. “The ground was very good and all the fences were inviting and very nice to ride.”

Coronel has already done two three-star events, one national and one international, and has won both, so Jorge is in confident mode for the final test and says that the eight-year-old is a very careful jumper. He has no margin for error, however, as Tosi and Glenfly are a mere 2.7 penalties adrift.

“That was an easy course for him,” Tosi said of Glenfly. “He was easily within the time. He was very comfortable with the fences. He isn’t tired, I think he could do another one now.”

Tosi, who led after yesterday’s Dressage with Briefing DB Z, decided not to run the 11-year-old across country. “Briefing is a three-star horse and there was no point riding him today (in a two-star event),” he said. “I will save him for his next event in three weeks.”

Friends Jorge and Tosi may still be vying with each other for the honours, but they are well ahead of the chasing pack. Last out across the country today, Marcio Appel and the 10-year-old Holsteiner gelding Cross Rock are 12.1 adrift off the pace in third, with Nilson Da Silva and Tiger Lu moving up from 16th after the Dressage to overnight fourth.

Three horses failed to complete the course. Ricky Candi (BRA) pulled up Natural TW after the first water, while Serguei Fofanoff walked Yankee Deapper home after two stops at the first element at the same fence. Luciano Drubi, who picked up 20 penalties for a refusal at the second element in the water with Riviera Lu, was then eliminated with Raica Lu after three separate stops on the course.

The horse inspection is at 9.30 tomorrow morning followed by the final Jumping phase before the medal ceremony brings the Aquece Rio equestrian test event to a close.