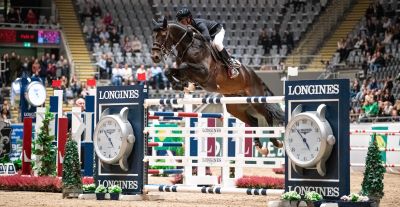 The opening leg of the Longines FEI Jumping World Cup™ 2021/2022 Western European League more than lived up to expectations, with young Dutchman, Kevin Jochems, winning through in an edge-of-the-seat jump-off.

Riding the fabulous 12-year-old stallion Turbo Z, the 26-year-old athlete snatched pole position and maximum points towards the series Final in Leipzig, Germany next April with the coolest of cool rounds when last to go in the seven-horse second-round decider.

Jochems was the sole Dutch representative on the 35-strong start-list of horse/athlete combinations that took on the 13-fence first-round challenge presented by Italian course designer Elio Travagliati, who certainly tested riding skills, and the attention of the horses, in the close confines of Oslo’s Telenor Arena. The beginning of the indoor season always takes some adjustment after competing all summer in the great outdoors, and some clever placement of fences ensured that both horse and rider had to be on top of their game to make the cut into the second round.

The double at fence six, approached off a bending line from the previous oxer and placed along the very edge of the ringside hospitality area, proved the bogey of the day. However, the triple combination three from home was also influential, while young American, 25-year-old Lillie Keenan, looked en route to a perfect tour of the track until her superstar gelding, Skyhorse, put in an uncharacteristic stop and decanted his jockey at the very final oxer when he couldn’t find his stride.

Also out of luck was host-nation veteran, 61-year-old Geir Gulliksen, whose Olympic ride VDL Groep Quatro hit the very first fence in an otherwise foot-perfect round. “He’s never done that in the whole time I’ve had him!” he said of his 15-year-old gelding who is always a real trier. But Gulliksen was delighted to be competing alongside his daughter and son, Victoria and Johan-Sebastian, and the many other young riders who lined out at this year’s opening leg of the Western European series.

“When you feel you can compete with the younger generation it’s an incredible feeling!” he said.

First to produce a clean run was 24-year-old Austrian, Alessandra Reich, with her big 10-year-old gelding Loyd, and they set the pace in the jump-off with another faultless effort in 50.20 seconds. This was clearly beatable, but the rest had to leave all the poles in place, and when only four managed to do that then Reich slotted into fourth spot in the final analysis.

Second to take on the clock was Sweden’s Peder Fredricson, at 53 years of age by far the elder statesman of the clear-round pack, and he reset the target when bringing the 10-year-old mark Cosmopolit home without fault in 46.72 seconds. Then 28-year-old Belgian, Olivier Philippaerts, set off with Le Blue Diamond v’t Ruytershof, but the tricky double at six was still in place, and when the 10-year-old gelding hit the first element there, four faults in 47.20 seconds would leave them down the order.

Next out was 22-year-old Harry Charles, who made a huge impression as part of the British side that won the Challenge Cup at the Longines FEI Jumping Nations Cup™ Final in Barcelona, Spain two weeks ago. But the penultimate oxer hit the floor before he crossed the line with Romeo in 46.70 seconds.

Sweden’s Fredricson was still out in front when Belgium’s Pieter Clemens set sail with just three left to go. Fredricson had demonstrated the benefit of a super-tight turn inside the oxer at fence four that shaved time off the run to the single remaining element of the triple combination at fence 11, and Clemens was well up on time when attempting that same line.

But his nine-year-old mare, Huide G, seemed to lock on to the final vertical that was facing her on the turn, and precious time was lost while the pair resolved the situation. “She didn’t really understand where she had to go,” Clemens explained afterwards, but they were still super-fast when breaking the beam without further ado in 46.09 seconds to take the lead.

Second-last into the ring, Germany’s Christian Kukuk had seen another short route that meant cutting inside the last fence like several of those ahead of him, but then also turning inside the opening vertical, which left a super-tight turn to the penultimate oxer. He made it work brilliantly until a wild gallop to the last saw his extravagant grey gelding, Checker, kick out all the poles for four faults, so his quick time of 45.31 seconds was still not good enough for top spot.

As Jochems came into the ring, he had a clear plan. “I went in thinking I will risk it all; whether I win or have one down, I don’t want to be too slow.”

But it was the execution of his plan that was so incredibly impressive. His 12-year-old stallion never looked under pressure, or particularly fast, as the 26-year-old rider steered exactly the same course as Kukuk and with complete composure and conviction every step of the way.

The pair was in total harmony from start to finish, and when they crossed the line in 44.77 seconds for the win the spectators, who had been spellbound to the very end, exploded with appreciation. The young Dutchman had given his lovely horse a fabulous ride.

“This was my first World Cup today and I’ve had a fantastic show here in Oslo!” said Jochems. “Turbo had a great outdoor season and was placed in several 5* Grand Prix classes, and I was reserve rider in Barcelona at the Nations Cup Final. I had a bit of a mixed feeling being there because I didn’t ride (on the team), so it is great to win today!

“This was my first indoor show in a long time, so this is the best possible start to the indoor season,” he added. Now he’s looking forward to the coming months. “The Netherlands only has one spot in the World Cup series, so it will be difficult, but I was told that if I get some points in Oslo I can do more events, so we will see!” Jochems said. This brilliant result is likely to ensure he gets plenty more opportunities.

At the post-competition press conference, runner-up Pieter Clemens complimented Jochems. Looking back on how the jump-off played out, he said he wasn’t sure he would have been quicker than the Dutchman even if he hadn’t gotten into a muddle on that crucial turn. “My horse is fast, but Kevin rode a great jump-off and I’m very happy with second place. I got some points and I hope I will get the chance to do more qualifiers now,” he said.

Third-placed Jens Fredricson was also pleased with his result. “I was delighted to be selected to ride here. I had a good outdoor season and was double-clear in the Nations Cup in Aachen, so things are definitely going in the right direction. For me it’s not so easy to get to the bigger shows because we have a lot of good Swedish riders, but this is a great start to have some World Cup points already,” he said.

Oslo Horse Show Event Director, Morten Aasen, was also a happy man. “I’ve had a few sleepless nights coming into the show. The situation has been so unpredictable, but when the (pandemic) restrictions were lifted a few weeks ago (in Norway), it was like a Christmas present!”

He was also delighted with the Longines FEI Jumping World Cup™ result. “I want to see new faces in the sport and the crowd wants to see young people beating the older ones!” he said. He got his wish, and it won’t be long before the action resumes with round two of the Western European League scheduled for Sunday 31 October at Lyon in France.