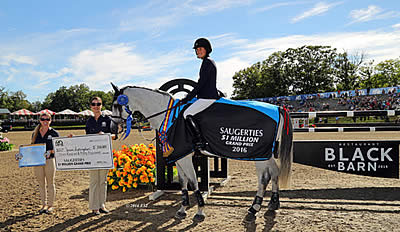 Saugerties, NY (September 12, 2016): As the sun set on the 2016 HITS Championship, horse sport royalty descended on the Hudson Valley for the nation’s highest ranked class of the year, the Saugerties $1 Million Grand Prix FEI-CSI 5*. Only one would be so lucky to return home with the big check and blue ribbon, and that one was none other than Jessica Springsteen aboard Cynar Va, owned by Stone Hill Farm. The victory marked the Wellington, Florida equestrian’s first CSI-5* win.

“It feels amazing to win this class. I’m really happy; this is my first five-star Grand Prix win,” said Springsteen. “My horse was feeling fresh this morning and was jumping around the course nicely, so I’m very pleased with the result today.”

Thousands of spectators filled the grandstand and hundreds more watched from the Legend VIP Club to get a glimpse of the historic event before them. The seventh annual $1 Million Grand Prix held in Saugerties attracted top riders from across the globe.

A top-notch field of riders and horses gave it a go over the course set by German course designer, Werner Deeg. It was evident as soon as the class began that the track demanded a high level of athletic ability and mental stamina, but it was true to Deeg’s plan: suit the movement of the horse.

“I have to thank Tom for inviting me and for putting the confidence in me to do this class, as well as the team I work with. All of the riders rode spectacularly,” said Deeg. “I had a rough idea of what I wanted to do for this class after watching the horses go throughout the week. This is a major class and I wanted to build something appropriate to that. For me it’s more important to implement the nature and movement of the horses in our courses.”

Six conquered the first round to advance to the jump-off, the greatest number of horses in the jump-off in the class’s history.

“It was a super class today with great sport. The top finishers all did an excellent job which certainly made for an exciting day, so my hat’s off to them,” said HITS President and CEO Tom Struzzieri. “We’d like to see them come back again and compete in the Million next year. This was our first time working with Werner, and he came with the absolute highest credentials and lived up to all of them.”

First to re-enter for the high-intensity jump-off was Brandie Holloway of Topeka, Kansas piloting Lucky Strike, owned by Hays Investment Corp. An unfortunate rail would leave them with four faults as they crossed the finish in 52.18, which would claim the fastest time of the four-fault rounds for the ultimate third place prize.

“Lucky Strike started off as an equitation horse, and after purchasing him and owning him for a year, we learned that he was truly a jumper, so he hasn’t been doing the upper level jumpers for a terribly long time,” said Holloway. “I thought the course was one of the best courses I’ve jumped, and it wasn’t just for one horse’s style. Everybody all around had a level playing field.”

Following Holloway was Lauren Tisbo of Wellington, Florida and MR Visto, owned Tequestrian Farms, LLC. They powered through the course but would also be thwarted by a rail, turning in a 52.84-second round with four faults, giving them fourth place when the class was finished.

Four more competitors remained in the order, and it was anyone’s game. Next to contend was Egyptian equestrian Nayel Nassar riding Lordan, winner of the 2013 edition of the Saugerties Million. They too would have a rail as they stopped the clock in 52.97 for fifth place.

Catherine Tyree of Chicago, Illinois gave the crowd the first clear round of the jump-off aboard Enjoy Louis, owned by Joseph and Mary Tyree. They took to the course with power and precision, clearing each fence as they went. They cleared the last fence in 53.29 as the crowd erupted into applause, a round that would garner them the second place prize.

“I know this horse so well. I’ve had him for a year and a half now,” said Tyree. “I jumped him here on Wednesday so that he could go around and get into the ring, and he jumped great today. He’s such a fighter and has a huge heart, so I have full confidence in my finish today.”

Eugenio Garza Perez, riding out of Wellington, Florida, was next to contest the shortened course aboard Bariano, owned by El Milagro. He laid down a trip in 52.55, but eight faults would ultimately settle him into sixth place.

The final trip of the jump-off belonged to Jessica Springsteen, and the atmosphere was electric as the young equestrian entered the ring. A clear round was crucial, but she would have to be quicker than Tyree to take home a sweet slice of the million-dollar purse.

“This was my third jump-off with [Cynar Va], so I haven’t had that much experience going quick,” said Springsteen. “Today I just tried to keep it together when we stepped up to go a bit faster, but he was jumping unbelievable, so I knew I could take a little risk. It all worked out and I am thrilled to win this class.”

Springsteen and Cynar Va went all in. They took each turn with aggression and skill, then galloped home to cross the timers in 52.55 to capture the lead. The crowd stood and cheered in excitement as a new rider sealed her spot in the HITS $1 Million Grand Prix hall of fame.

“All of us at HITS are certainly happy with the result today; it was a terrific class and a great turn out of people who came out to watch the riders here,” said Struzzieri.

The HITS Championship marks the close of the eight week HITS Saugerties Series. The next event on the HITS competition schedule is the Marshall & Sterling Insurance League National Finals on September 14-18 at HITS-on-the-Hudson. The Marshall & Sterling Insurance League is a grassroots organization dedicated to providing competition for up-and-coming Children’s and Adult Hunter, Jumper and Equitation riders.