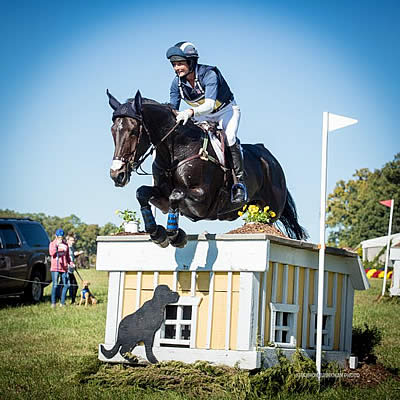 “I’m very, very excited to have been chosen,” Brannigan said. “I think the first job I ever got working for Phillip Dutton was to go out into the field and catch Connaught, so it’s special in that I worked for Phillip and actually got to ride that horse.”

The Connaught Grant was established by Caroline Moran in honor of the late R. Bruce Duchossois, and awards $25,000 to a CCI* or CCI2* horse in the U.S. that is seen as a potential candidate to represent the U.S. Equestrian Team on an international level. The grant, which helps offset the cost of competitions, travel in relationship to competitions, training and horse care.

The grant is named after the famous event horse Connaught, who was owned by Duchossois and ridden by Dutton. Connaught, who also passed away, won Rolex in 2008, was second in 2007 and represented the U.S. at the 2008 Beijing Olympics.

Brannigan acquired Stella Artois, now 8, along with half-owner Beth Battel as a 5-year-old young horse in Germany. The Holsteiner/Thoroughbred mare began competing at the 2* level earlier this year, impressively winning the CCI2* division at the Dutta Corp. Fair Hill International in October.

“I put every penny I had in my savings account to buy half of Stella Artois,” Brannigan said. “It was really special to have her win Fair Hill and have the year that she’s had. I always had the feeling that she was a bigtime horse, and hopefully this is a good omen for the future.”

Brannigan said with the help of the grant, she hopes to travel to Europe to compete with Stella Artois, furthering the mare’s experience at the 2* level before hopefully stepping up to 3* competitions later in the year.

“I am just determined to do the right thing by this mare,” Brannigan said. “Receiving this grant is a big honor, and hopefully we’ll live up to the expectations.”

For more information about the USET Foundation, please visit www.uset.org.