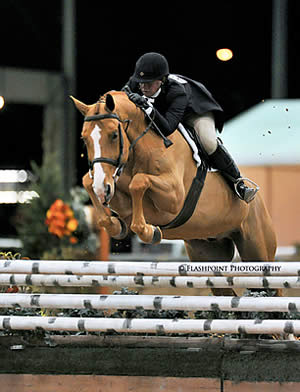 Week 2 of the Jacksonville Winter Series and the annual $25,000 USHJA International Hunter Derby sponsored by Glen Kernan Golf & Country Club were a success.  As spectators wined and dined in the VIP tent, Jennifer Alfano and Jersey Boy proved unstoppable as they continued their winning ways to best an impressive class of 24 horse/rider combinations.  During the first round they laid down a beautiful trip, moving into the fourth place position as the top 12 continued into the handy round. Jersey Boy is well known for his finesse in the handy round, and he continued to impress as they were awarded the top score, and subsequently, the highest score overall.

“He was good in the first round; he was a little rusty,” Alfano explained. “He hasn’t actually jumped a course since Harrisburg. He was really good, but had a really hard rub. He came back in the handy and was awesome.”

Alfano continued, “There were a couple inside turns, one that was at the end, that about half of the people did, but it was a difficult turn, and for some it was a little rough. The turn went to the high option at the end, and if you did the inside turn you almost had to add a stride. We did it really smoothly and didn’t have to add any strides. He was just really on. I was pretty far behind going into the second round, and I knew I had a lot of ground to make up. I picked up the gallop and just kept going.”

There is no entry fee and each class offers $1,000 in prize money.  All 3 classes are open to all exhibitors EXCEPT Professionals.  Please take a look at the schedule here for class placement.