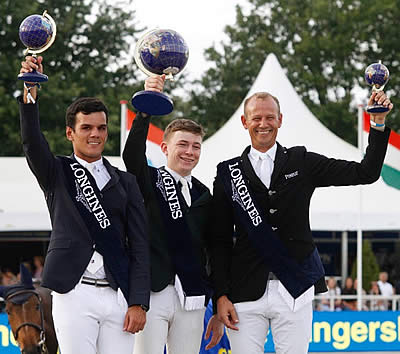 Youth very definitely had its day as the FEI World Breeding Championships for Young Horses 2019 at Lanaken in Belgium drew to a close.

The final day of action kicked off with gold for Jason Foley and the Irish Sport Horse Rockwell RC in the 5-Year-Old category before Germany’s Katrin Eckermann steered the Rheinlander mare Chao Lee into pole position in the 6-Year-Old division. And then Seamus Hughes-Kennedy made it an Irish double when topping the 7-Year-Olds with Cuffesgrange Cavadora.

The horses always take centre stage at this prestigious annual event that highlights future stars and brings together top sport, quality breeding, and horse sales while recognising and rewarding breeders, owners, and riders. But this year’s Irish celebration will be two-fold, because their success was achieved by stunning performances not just from the four-legged athletes, but by a young generation of riders with so much promise.

Foley only turned 18 in June, Hughes-Kennedy is just 17 years of age, and Michael Pender, who will turn 20 later this month, claimed 5-Year-Old silver with the Oldenburg stallion Chacco Bay and silver again in the 6-Year-Old class partnering the Irish Sport Horse Mare MHS Cardenta.

From a starting field of 243 horse-and-rider combinations, a total of 46 made the cut into the 5-Year-Old medal-decider and 11 qualified for the second-round jump-off against the clock. Pender, who shot to prominence when bagging 5-Year-Old silver and bronze in 2016, looked to have snatched the gold the time around when steering Chacco Bay (Chaccato/Hoeps) through the beam in 38.15 seconds. But the stallion owned by Hilltrup Sporthorses Gmbh and bred by Alfons Brueggehagen was pipped by an extraordinary run from Foley and the Kannan mare Rockwell RC who stopped the clock in 37.72 seconds.

Foley admitted that he was struggling a bit with his steering in the jump-off, but for a very good reason. “I dislocated my shoulder three weeks ago in a fall. I didn’t actually think that I could make it here, so I hope the hospital doesn’t see this, but I thought, let’s try it, and I was lucky that it went OK!”

Owner Sean Cubbit was delighted with the result. “I bought the mare last year from Ryan Crumley, and back in January she came home to me to have a little rest. After I put Jason on her I knew they were a great match. Their first big show was in Dublin where they were an unlucky second, but today it was just perfect!” he said.

Bronze went to 26-year-old Emma Stoker and the Zangersheide mare Skylandria Z (Super Trooper de Ness/Indoctro) owned by Euro Horse BVBA.  “I’m in complete shock, to be honest!”  said the British rider whose future was unsure after her former employer recently sold all his horses to Belgium’s Axel Verlooy.

“I and my former boss bought Skylandria Z a year ago and then I thought I was going to lose her and then I got her back, and today I win world championship bronze, so I’m very happy!” said the delighted British rider.

There was a massive field of 265 horses in contention for the Six-Year-Old medals and 39 of those qualified for the finale, in which 16 went into the second-round jump-off. Belgium’s Jeroen Appelen set a strong target when clear in 43.54 seconds with the BWP stallion Nero de Semilly N (Diamant de Semilly) owned by Frank Goossens and bred by Ludwig Neyt, but third-last to go, Katrin Eckermann, smashed that time when scorching through the finish in 40.64 seconds with the Rheinlander Chao Lee (Comme Il Faut/Chacco Blue). And that couldn’t be bettered, despite a superb effort from the final Irish duo of Michael Pender and MHS Cardenta (Cardento 933/Diamond Serpent) who had to settle for runner-up spot.

This was a really special victory for Eckermann and her family. “We bred Chao Lee ourselves and I got her to ride last year. Immediately after we already won the Bundeschampionat as a 5-year-old, and this year we were second! She always does a fantastic job and I’m so happy to have a World Champion and to be the breeder as well. I’m really really proud for my dad because he is a really hard worker, and for me this is the best horse possible!” said the 29-year-old German rider.

Despite being beaten for the gold by just one-tenth of a second, Pender was also well-pleased with his mare which was bred by Olive Clarke and is owned by Bravo Hughes Ltd. “I am absolutely delighted with her; she jumped amazing and tried her best,” he said.

And Appelen had plenty to celebrate too because not only did his very inexperienced horse really rise to the occasion, but he claimed the bronze medal on his 29th birthday. “This was my first official show with Nero; we bought him only three months ago and only trained him a bit at home and then we did a small test in a regional 1.15m class!” he explained. “Being first to go in the jump-off is never easy but I don’t think I could have done it faster. My horse jumped amazing and I did my own round. I am really happy it worked out!” the birthday boy added.

A total of 201 horses battled it out for the 7-Year-Old honours earlier in the week and 40 made it through to the medal decider which came down to an eight-way jump-off against the clock.

Belgian course designer Eugene Mathy presented them with another challenging track, and in the end only four managed to complete double-clear rounds. The Netherlands’ Mathijs van Asten produced the first of these with the feisty chestnut stallion Hotspot (Hors la Loi II / Nabab de Reve) when clearing the line in 40.71 seconds, but then Brazil’s Victor Mariano Luminatti brought Chippoline Second Life Z home in 38.70 to take the lead.

And despite a very classy clear from Marco Kutscher and the Hanoverian gelding Policeman (Perigueux / Acord II) which is owned by Brigitte Weeke-Therling and was bred by Heinz Sprenger, the Brazilian rider was still out in front when the German star crossed the line over a second slower.

But, last to go, young Irishman Seamus Hughes-Kennedy had his foot to the floor with the ISH mare Cuffesgrange Cavadora (Z Wellie 72 / Luidam) which was bred by Eamon Sheahan. And when the pair galloped through the timers in 38.58 seconds they demoted Mariano Luminatti to silver medal spot and pushed Kutscher into bronze.

“Last year Cavadaro finished fourth in the 6-Year-Old Final with Ger O’Neill in the saddle. They were clear and in the lead until the last few competitors but just missed out on a medal, so I’m very pleased we’ve earned gold today,” said the talented young Irish rider. And the future is already mapped out for this winning pair, it seems. “We’re going for European Junior Gold next year!” said the rider’s mother, Clare Hughes, who also owns the winning horse.