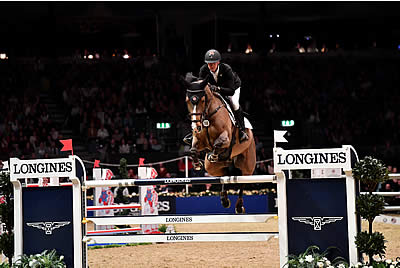 The fourth day of Olympia, The London International Horse Show provided top class sport and entertainment from the outset, with another exceptional day for Great Britain.

Meanwhile, Extreme Driving got underway with a win for World No. 1 Boyd Exell, with Britain’s Daniel Naprous recording his best-ever result in second.

Popular British rider William Whitaker is on a roll at Olympia, The London International Horse Show. Having shown his mettle over height, taking joint first by clearing 7ft 2in with RMF Charly in the Cayenne Puissance, he proved his competitive versatility with a speed win in the Shelley Ashman International Ltd, E M Rodgers (Transport) Ltd Snowflake Stakes by a massive 3 seconds with RMF Chacco Top.

Being drawn in the top half of the field, William, who is based between Germany and the USA, had to set a tough target. The tactic worked and after a number of rivals collected faults trying to chase him others opted for a steadier pace and a safer placing, with Switzerland’s Pius Schwizer riding Cas coming closest to take second place.

“He [RMF Chacco Top] had a couple down yesterday, but he needed to get used to the arena,” said William. “The crowds really help to give you a boost; they are like that right through the show; it’s great.”

The evening performance got underway with another British win in The Lemieux Six Bar. Jumping big fences is all about power and Laura Renwick’s partner Top Dollar VI has that by the bucketload. Clearing the final 1.95m fence with ease, the pair took the win as the only combination to remain faultless after four rounds.

“I hate to say he makes it easy, but the strength he has is special,” said Renwick of the 10-year-old stallion, joking: “I just wish I had a bit more control!”

The class involved the fences being raised in each round, a pole on the floor resulting in elimination. By round four, only four combinations remained. Laura and Top Dollar VI set the standard, producing their faultless run at the final four-fence line as first to go. However, each one of the three that followed – Jos Verlooy (BEL) and Fabregas, Michael Pender (IRE) and Hearton de Bois Halleux, and Emily Moffitt (GBR) and Copain du Perchet – all faulted to hand Renwick the win.

The feature class of the day saw another big win for Ireland as Anthony Condon took the Champagne Taittinger Ivy Stakes on his own and Pat Hales’ SFS Vincomte with two perfectly judged clear rounds, despite being the class pathfinder.

Condon, who is from Co Waterford but lives on the Shropshire/Cheshire border, was first to go in a competitive field of 33 and made it look easy on the nine-year-old by Veni Vidi Vici. Scott Brash, next to go on Hello Jefferson, also went clear, but then Course Designer Alan Wade’s cleverly designed track began to exert influence with faults evenly spread throughout the course.

Condon’s jump-off time of 38.53 was clearly beatable, but surprisingly, none of the other five could produce a clear round, William Whitaker taking second with the fastest time of 34.48 seconds but a fence down.

“I wasn’t expecting to win, especially looking at the standard of the other riders in the jump-off,” admitted Condon, 32, who will ride SFS Vincomte in Sunday night’s Turkish Airlines Olympia Grand Prix. “My horse is quite green for this level, but he was more settled today. He just needs more experience and then he will be top class.”

The Irishman, whose three-year-old son Hector was keen to tell Father Christmas about Daddy’s win, is now fourth in the Leading Rider of the Show rankings after two full days of jumping, behind the British trio of Holly Smith, William Whitaker, and Ben Maher. Michael Jung, the reigning Olympic eventing champion, who is paying his first visit to Olympia, is in equal fifth place with Laura Renwick.

The first driving competition took off with a bang, as Boyd Exell cruised home ahead of Daniel Naprous in the Extreme Driving, supported by Karen and Hugh Scott-Barrett.

The timed competition, consisting of two rounds with the fastest three going through to the second round to complete a different course against the clock, was an exciting opener to the FEI Driving World Cup classes, which will come later in the week. British driver Daniel Naprous meant business when he entered the arena for the first time, and drove with full power and determination to finish on 133.39 seconds with 4 to count.

This was a momentous occasion for Naprous, who qualified for his first ever drive-off. USA’s Chester Weber, drawn second to go, made an early error but made up for it with some spectacular driving to finish on 144.41 and 4. Last to go, Boyd Exell produced a masterclass of fluidity and speed, finishing the first round on 129.6 with nothing to add to head into the lead.

In the second round, Naprous was quick but paid the price with 12 to add. A steadier round from Weber still resulted in two balls falling for 8 faults; however, Exell’s second drive was foot perfect, driving a clear round in a time of 131.77 seconds to take the victory.

Exell said, “When I walked the course, I knew it could be very fast. Tight turns also meant you had to drive with 100% accuracy, so I’m really pleased with how my team performed.”