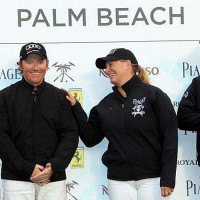 The 20-goal season got underway Thursday with the semifinals of the Herbie Pennell Cup Tournament with defending champion Coca-Cola and Villa del Lago advancing to Sunday’s championship final at 3 p.m.

Actress Bo Derek (of “10” movie fame) will throw out the first ball for the game and will be joined by former University of Miami football All-American Jeremy Shockey for the trophy presentation. La Herradura and Lechuza Caracas will play the consolation game at 1 p.m.

“Aside from Argentina, the 26-goal tournaments we play here are the highest in the world that are being played,” said Jimmy Newman, IPC’s director of polo operations, at Friday’s season kick-off press conference at the IPC’s Mallet Club.

“The 20-goal has become the heart of all of this,” Newman said. “This is where all the great players come and play for the winter. You talk about polo – IPC is the big time. The teams bring such excitement to the season.”

“Piaget has been very committed to polo for a number of years,” said John Wash, president of club operations. “Piaget and Lauren Duffy we thank them for the years of sponsorship here at IPC. Piaget is the sponsor of the Piaget Gold Cup. We couldn’t do it without our sponsors like Piaget.”

Nestled in the heart of South Florida’s hallowed horse country, IPC is a world-class facility designed to showcase the sport’s top players and horses with an estimated economic impact of $180-200 million for the community during the four-month season, according to Wash.

Audi and Piaget are among top teams expected to challenge for titles throughout the season. Audi opens its 2013 season on Thursday, Jan. 10th against Coca-Cola at 1 p.m. Piaget’s first game is Sunday, Jan. 13 against Zacara.

Audi, 2009 U.S. Open champion, will compete in both the 20- and 26-goal tournaments for the second consecutive year.

Ganzi is ranked among the top amateur polo players in the world according to the World Polo Tour rankings.

Audi has the momentum coming into the 2013 season after sweeping the fall 20-goal fall season at Grand Champions Polo Club winning both the USPA National 20-Goal and USPA North America Cup tournaments.

After a three-year hiatus, Piaget competed in the 20-goal tournaments last year winning the Ylvisaker Cup.

Among other season highlights are the Feb. 15 Polo Hall of Fame Inductions at the National Museum of Polo in Lake Worth and Outback 40-Goal Challenge on Saturday, Feb. 16 at 3 p.m. to benefit the Polo Players Support Group, Inc.