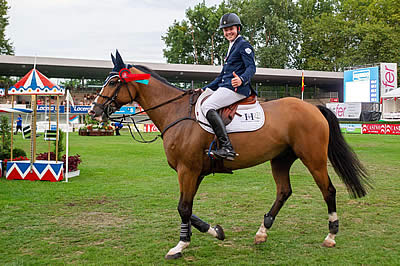 This week, the Rolex Grand Slam of Show Jumping has been catching up with the new generation in professional show jumping. Almost 40 years younger than some of their senior competitors, we took a look at how initiatives such as the Young Riders Academy and the introduction of U25 competitions at the Majors gives young riders the opportunity to break into the senior world.

What has been the highlight of your career so far?

Definitely competing in the Rolex Grand Prix in Aachen; that has always been the dream of mine since I was small and to be able to do it was incredible. I still have to pinch myself that I have done it, to be honest with you. Sometimes when I am hacking with ABC Quantum Cruise at home, I look down and say to him, ‘can you believe that we jumped the Rolex Grand Prix at Aachen?’

Who are your idols / which riders do you look up to?

For me it has always been Scott (Brash). As well as great rider, he’s a really nice guy too so he is definitely my idol. We talk about everything actually and he is always willing to help me out and lend a hand. Especially when I started doing the big shows, he was always the first one who would come and sit with me at breakfast in the morning at the big shows when I didn’t know anyone, which I really appreciated.

The Rolex Grand Slam Majors are promoting youth by organizing more and more U25 competitions; what is your point of view on this?

I think it is great; any chance for a young rider to jump in a top-level event like any of these shows is massively important and influential. Being among the top riders with a big crowd is just amazing, not only to inspire and motivate young riders, but also for their exposure. For example, when I was in Aachen, so many people contacted me, and I think I gained about 400 followers on my social media platforms each day I was there. Taking part in these events really does give you drive, and although you may only be able to jump two classes, it makes you even more motivated at the idea of jumping more later down the line.

What do you think are the three most important attributes for being a professional show jumper?

Work ethic is number one for me and I think it is the same in all sports. You have to work hard in order to achieve your goals and you have to be willing to learn. It is also very important to have good people behind you who you trust. Finally, a good relationship with your owners is so important because the role of the owners has evolved so much.

What impact has your owner had on your career?

I have a very good owner and I am very lucky that I could keep riding Igor because a lot of people wanted to buy him. Our sport is not just about riding; it’s about finding the right horses and the right partnerships and that is where the importance of the owners come in; it really is a team effort.

You are almost 40 years younger than some of top riders who are still competing – what are the tools you need to have such a long career?

It’s hard to say, but definitely the most important thing is to have the right horse. Even if you’re 50 you can always learn and keep improving and I think if you have a good horse you can perform at the highest level whatever your age. I have a lot of respect for Ludger Beerbaum who has had an incredible year and always kept the right people behind him. It’s only until you’re in the sport that you realise how difficult it is to have the right horse, the right management, and the right team; you need all pieces in the puzzle, really.

Do you feel a responsibility to help grow the sport of show jumping in Asia?

I am really glad to see that the sport is growing in Asia. As a Japanese and Asian rider, I definitely feel a responsibility and want to play whatever part I can in expanding the sport. I think at least in Japan there is a big interest in horse racing, but not so much show jumping. I think the reason it’s not as popular yet is because it’s not quite as well-known, but I think once people learn how great show jumping is and how great the horses are, I do think it will become very popular. It is all about building awareness around the sport and I think with the Olympic Games coming up this is starting to happen, which is great. The Japanese eventing team is very strong, both individually and as a team. Also, they are hosting an Asian Championship in Thailand in December for the first time and that involves a lot of investment and infrastructure, so there definitely is a growing interest in the sport.

When did you decide you wanted to be a show jumper?

Probably when I was a junior. I competed in the US national jumper championships, and I went into it being a real under-dog. I had an amazing week and my horse was incredible and we ended up winning which was very special. After that I understood what it felt like to win and that’s when I knew I wanted to do show jumping. I thought to myself, if I work really hard, I could maybe achieve more. After that moment I just absolutely loved show jumping and it catapulted from there.