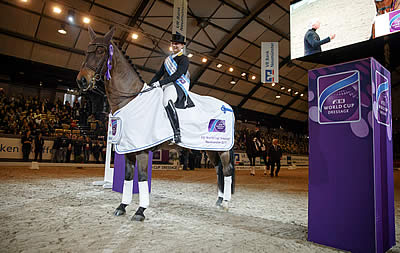 Neumunster (GER), 19 February 2017 – With consummate ease, and more than a little style, Germany’s Isabell Werth claimed her fourth victory of the FEI World Cup™ Dressage 2016/2017 Western European League at Neumunster (GER), scoring 82.455. She already had a hat-trick under her belt following wins at Lyon (FRA), Stuttgart (GER) and Amsterdam (NED) but those were all achieved with her sensational 12-year-old mare Weihegold FRH. However, it was the 15-year-old Don Johnson who claimed the limelight for the 47-year-old rider whose never-ending list of accolades includes two World Cup titles.

Runner-up was 2013 champion Helen Langehanenberg (34) with the 15-year-old Damsey FRH whose enthusiastic final extended trot almost brought him eye-to-eye with Ground Jury President Dr Hans-Christian Matthiesen. The close encounter didn’t prevent a strong score of 79.150 however, pinning The Netherlands’ Madeleine Witte-Vrees (44) into third on a mark of 77.765 while, last to go of the 15 starters, Switzerland’s Marcela Krinke-Susmelj (51) finished fourth with Smeyers Molberg.

The cosy fit of the Neumunster arena is always a character-test for horses, with the judges and spectators only a whisper away from the action, so Werth was delighted that “Johnny” held it together after tension in the Grand Prix which they won by a relatively slender margin ahead of Witte-Vrees. “He was really super today, really happy and focused so I enjoyed it and could take a lot of risk. The atmosphere here is always difficult but I was fairly confident, even though you never know exactly what’s going to happen – especially with Johnny!” she said.

The knowledgeable crowd was so accurate with their scores in the spectator judging that show organiser, Paul Schockemohle, joked, “Maybe we don’t actually need judges all the time!”  Witte-Vrees said the spectators “showed great respect and gave almost a standing ovation for every rider!” but the intensity of it all saw Judy Reynolds’ 15-year-old Vancouver K bubble over to leave the Irish pair well down the order in tenth place.

It was all good news for Werth, however, and she knows she is spoilt for choice as she heads to Gothenburg (SWE) for the penultimate qualifier next week with Emilio and then brings Don Johnson to the last leg in ’s-Hertogenbosch (NED) ahead of the series Final in Omaha (USA) next month. “It’s great to have so many horses in good form at the same time and I’m delighted with Johnny today. He’s like a good red wine: he keeps getting better!” she said.

Isabell Werth GER (1st): “The crowd here goes crazy after each test, so a lot of horses get a bit crazy with all the applause and the prize-giving can be very intense! Sometimes Johnny bucks when he’s excited but mostly he tries to take care of me. He has a lot of character and he doesn’t mean to be mean!”

Helen Langehanenberg (2nd): “I won here in 2012, 2013 and 2014 and it’s very emotional to be back! The crowd was fantastic and welcomed me back so it’s been a great day. I’ve had this horse for a year but we are still getting to know each other. His previous rider was very tall and I’m small so we both have to adapt. Today I felt we were really working together so now it’s time now to start making some plans.”

Madeleine Witte-Vrees NED (3rd): “My next show is Den Bosch, and with today’s points I may be qualified for Omaha so if it stays that way I will definitely go. I changed things in my test today and it was good; I’m happy. There were three major mistakes during the test too, but my horse is still quite young, only 10, so it’s okay to make mistakes, we know we still have work to do.”

Dr. Hans-Christian Matthiesen, Ground Jury President, talking about the new judging system introduced this season: “The judges having to concentrate even more. It’s a challenge and a different way of thinking than in the past. We have a meeting at each show before the competition to discuss things, but I know once we all get used to it then it will be easier.”

Show organiser Paul Schockemohle: “We have had 38,000 spectators at Neumunster this week and today we have a full house!”

Don’t miss a hoofbeat! Watch it all LIVE on www.feitv.org