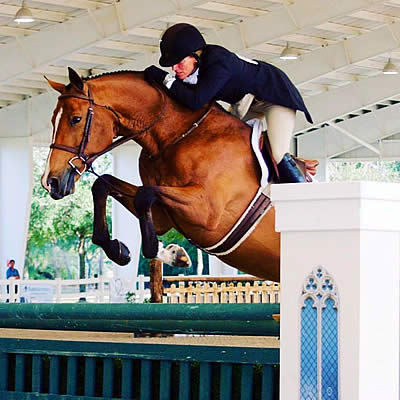 Kelley Farmer and Because (Photos courtesy of Equinium Sports Marketing)

The second of The Ridge Palm Beach Series’ Hunter Derby Days commenced February 10th, featuring a $5,000 USHJA National Hunter Derby, $15,000 USHJA International Hunter Derby, and a $5,000 USHJA Pony Derby. Held under the spectacular covered arena at Jim Brandon, the three classes featured a challenging and beautifully designed course, as well as some of the top horse and rider combinations showcasing the athleticism of the performance hunter. Friday’s events kicked off with the USHJA National Derby, continued to the International Derby in the afternoon and concluded with the Pony Derby under the lights in the evening.

With the jumps and prize money raised, the $15,000 USHJA International Hunter Derby began with Kelly Farmer and Scripted took an early lead with 182, but eventually was bested by her own effort with Because to secure victory. Scripted’s early effort was bumped to fifth by Amy Momrow and Aeroplane, Jennifer Hannan and Flamingo-K, and taking reserve honors, last month’s USHJA International Hunter Derby champions, Louise Serio and Rock Harbor.

The Dutch-bred gelding Because, who was purchased in Ocala barely a year ago with Jane Gaston, had only the highest accolades to his name from Farmer, who rode him to his first Derby victory, and from Gaston, who has ridden him to numerous championships and Horse of the Year Honors in the Amateur Owner divisions. “He is an extraordinary animal, with potential to be one of the best Derby horses I’ve ever ridden,” stated Farmer. “He usually pulls double duty with me and his owner, and has won in everything, now from the Derbies to the greens, 4-foot, and Amateurs.”

Owner Jane Gaston had equally rave reviews, stating, “He has huge range & scope, and is a total gentleman. Originally started as a jumper, he has made great progress with Kelley and I in the hunter ring, and we are thrilled with his first Derby win.”

As one of the top hunter riders in the world, Farmer is a regular on The Ridge at Wellington’s Hunter Derby Days series, taking top honors in the International Derbies in 2016 and now a win with Because in 2017. “Nona and George do a great job, they’re very accommodating, and this is a great venue and show for a young horse to learn what horse shows are without getting thrown into a very intense environment. This, for a derby horse, is a bit like starting a Grand Prix horse: they get to jump at a real horse show on nice footing, real jumps, nice course designers, and are still doing the real thing without the pressure. Nona and George have done a beautiful job creating the perfect conditions for effectively bringing along horses.”

From the big leagues to the ponies, the covered arena transformed once again into a miniaturized version of the International Derby course and welcomed a group of talented ponies and riders. An exceptional round by Kat Fuqua and Somekindawonderful led the field for the evening’s $5,000 USHJA Pony Derby from beginning to end. Fuqua and her Captain America, who were the champions of January’s USHJA Pony derby, finished third, with Augusta Iwasaki and Small Suggestion taking reserve honors.
Consistently attracting top names in the sport, including Olympians, medal finalists, and international champions, the Hunter Derby Day competitions offer an exclusive way to gain national and international experience, as well as qualifying scores, in a utopian show atmosphere.

For the second week in a row, Venezuela’s Emanuel Andrade and Belita ruled the Grand Prix, putting in impressive double clear rounds that proved to be uncatchable. The first double clear round went to Ilan Bluman and Eax Run Run LS, who finished on a final jump off time of 34.385. Soon after, Lauren Crooks and Columbeille de Reve stole the lead from Bluman, only to have it stolen almost immediately by Andrade and Benita. The athletic bay mare and the Venezuelan young rider put in a blazingly fast jump off round, taking a commanding lead over the rest of the field with a 29.431. A late effort by Kelly Cruciotti and My Flores bumped Crooks into third, but no horse & rider combinations were able to challenge Andrade’s lead, despite a field full of accomplished international Grand Prix competitors including Daniel Bluman, Darragh Kenny, Pablo Barrios, and Peter Jordan.

The Ridge at Wellington’s Palm Beach series continues with full hunter and jumper divisions each week, Wednesday – Sunday, as well as February 24th’s Turf Tour at Polo West, USEF Equitation Tuesdays, and each week a $15,000 1.40m Grand Prix on Friday and a $5,000 1.30m Open Stake on Saturday.