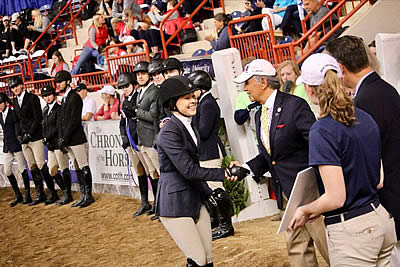 FAIRFIELD, Conn. – Sept. 3, 2019 – Robert E. “Bob” Cacchione, the charismatic leader of the Intercollegiate Horse Shows Association (IHSA), will retire from the executive director position of the organization he founded. Cacchione announced his decision in a letter to the IHSA board of directors, effective Sept. 1. He will continue to promote and support the IHSA and will assume the role of founder emeritus. Peter Cashman, IHSA second vice president and co-coach of the U.S. Military Academy at West Point’s equestrian team, will assume the role of interim executive director until a formal board election will take place June 2020.

“It’s been a great ride,” Cacchione said. “It’s been my passion and my life’s work. Never did I dream that it would be what it is today. I want to thank all the dedicated coaches and past and current board members for working to build this great organization. It has been an honor. The IHSA is in capable hands and will continue to grow and thrive. I’ll still be around to advise and help in any way I can.”

Cacchione has made a profound impact on the equestrian world. As many as 250,000 men and women have participated in the IHSA since 1967 when he founded the organization as an 18-year-old student at Fairleigh Dickinson University in Teaneck, New Jersey. Cacchione’s brainchild was born out of his determination to find a way to ride while in college without the financial support of his parents. He and mentor and adviser Jack Fritz, a renowned horseman active in the governance of several equestrian disciplines, developed the prototype of IHSA competition, which included catch-riding appropriate horses, drawn out of a hat, that were supplied by host schools.

Launched with just two colleges competing in hunter seat equitation, the IHSA was praised for its innovative format and quickly caught on. In 1979 the Western divisions premiered at the IHSA National Championship Horse Show. In 1999, IHSA Inc. was established as a nonprofit organization.

The organization now has over 400 participating colleges and universities and 10,000 members. IHSA is comprised of 39 regions in 8 eight zones in 47 states and Canada. Because the IHSA offers all levels of competition, from beginner through advanced, and offers college students a way to learn to how to ride, it makes a significant impact on the grassroots development of the equestrian sports.

IHSA members make up 10 percent of the membership of the United States Hunter Jumper Association (USHJA) and the IHSA is credited for being the single greatest source of new members to the American Quarter Horse Association (AQHA).

Some of the most notable riders in show jumping and the Western disciplines competed in the IHSA during their college years. Four-time Olympian and two-time Olympic gold medalist Beezie Madden competed for Southern Seminary and won the Cacchione Cup in 1984. Olympic gold medalist Peter Wylde won the Cacchione Cup in 1986 while he attended Tufts University.

As executive director for 52 years, Cacchione has proudly led the IHSA, shaking the hands of every competitor at the IHSA National Championship Horse Show and working tirelessly alongside board members who have become lifelong friends. With his devotion to the IHSA and the number of lives it has impacted, Cacchione is regularly recognized and acknowledged during his travels by people from all walks of life who once participated in the IHSA.

“From September to May, I traveled to a show every weekend,” he said. “I’ve loved it, but I look forward to less travel and more time with family.”

Cacchione has been recognized for his commitment to college riding with the IHSA Lifetime Achievement Award, the USHJA Presidents Distinguished Service Award, US Equestrian/EQUUS Foundation Humanitarian Award, a Doctor of Humane Letters from Centenary College, and the American Horse Publications Equine Industry Vision Award. He also serves as vice-chairman of the Gentlemen’s Committee of the National Horse Show at the Kentucky Horse Park.