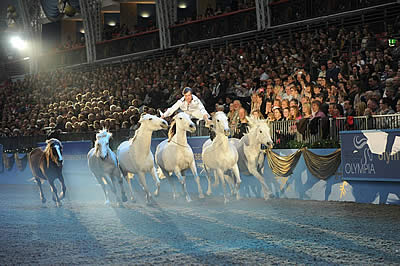 Organisers of Olympia, The London International Horse Show are delighted to announce Jean-François Pignon will perform his new ‘Black and White’ display for the first time in the UK at this year’s event. Adding to an already impressive line-up of displays, Pignon’s performance, which comprises eight white and six black mares, is bound to be a crowd pleaser, as he wows the crowds with his unique skills.

The renowned Frenchman, who has been performing internationally for over 30 years, has been training horses since he was 11 years old with his goal being to communicate with his horses on another level, by working with them in a natural way. He now educates people all over the world by demonstrating his methods.

Show Director, Simon Brooks-Ward, said: “We feel incredibly privileged that Jean-François Pignon has chosen Olympia, The London International to perform his ‘Black and White’ display in the UK for the first time. He is an extraordinarily talented horseman, and I know fans will be travelling from around the country to see this display.

“The bond between Pignon and his horses is exceptional, and his performances always delight our audiences. It’s incredible to see the trust these horses have in Jean-François and how relaxed they are in front of such a large crowd.”

Jean-François Pignon said: “The idea for the display originally came from my vet, who asked me to work with these young mares who had never been handled by humans before. One year down the line and the idea is in full development and it is such a pleasure to be able to share this magic with an audience.

“The atmosphere at Olympia is incredibly special and the London audience is always so engaging. I am looking forward to giving a magical performance to all those traveling to London to see ‘Black and White’ for the first time.”

Also gracing the Olympia Grand will be the Household Cavalry Mounted Regiment, performing its Musical Ride at this year’s Show. Made up of 28 horses and 36 mounted ceremonial service members – who also serve as fighting soldiers – the Musical Ride is unique across the globe, as it demonstrates exceptional horsemanship and the very best of British military tradition. Having not appeared at the West Kensington venue for many years, the Musical Ride of the Household Cavalry Mounted Regiment is set to be one of the most exciting displays of the week.

Living up to its reputation as one of Europe’s leading indoor equestrian events, Olympia, The London International Horse Show will once again host the world’s top competitors in three FEI World Cup™ disciplines: Carriage Driving, Dressage, and Show Jumping. The expected 90,000 visitors will experience top quality competition and displays this Christmas, such as the much-loved Christmas Finale, The Shetland Pony Grand National, and the Turkish Airlines Olympia Grand Prix.