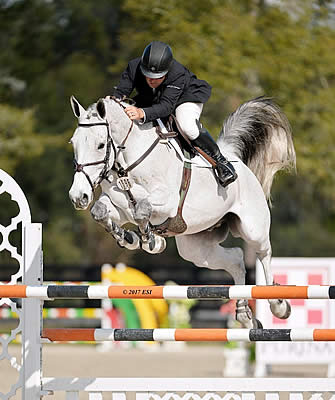 The 2017/2018 edition of the HITS Ocala Winter Circuit got underway last week with the Ocala Holiday Premiere, the first show of the two-week HITS Ocala Holiday Series.  The weather was just about perfect and a great group of horses and riders turned out, all with an eye on the blue ribbon.

The jumpers kicked off on Friday with the $25,000 SmartPak Grand Prix where Aaron Vale aboard STAKKO took home the blue ribbon. Vale also took home fourth place aboard CASSEVEL. In second place were Kirk Webby and BRANDO DU ROUET, followed by Jared Peterson and CATANO 29 in third place. Hayley Waters and GALOUS would round out the top five in the class.

On Saturday the $5,000 Johnson Horse Transportation Classic took place, with Charlie Jayne taking home both the first and second place honors aboard AMICE Z and EVER BLUE, respectively. Third place was won by Vale aboard EXCLUSIVE, followed by Nicole Bellissimo and her partner HARLEY DAVID in fourth, and Kyle Dewar aboard CLEVER VAN DE HELLE in fifth place.

Vale returned to the ring for the $25,000 HITS Grand Prix on Sunday and wrapped up the week with another win, as well as the second and fourth place awards, riding CASSEVEL, BONZINI S and STAKKO to their respective placings. Third place was Derek Petersen aboard DIAMANT’S LEGACY, and rounding out the top five was Hayley Waters aboard her partner GALOUS.

In the Hunter rings, the $2,500 Devoucoux Hunter Prix took place on Saturday where Shachine Belle and FUERST APOLLO LL took home the blue ribbon. In second place were Helen Goddard and MY WAY, followed by Melissa Deryn Foster aboard CARRILOU in third. This was the first qualifying class of the season for the Diamond Mills Hunter Prix Finals which take place at the HITS Championships, September 5-9, 2018, and riders were eager to get a leg up on qualifying for the prestigious Final.

For more information or to submit your entries electronically, visit HitsShows.com.