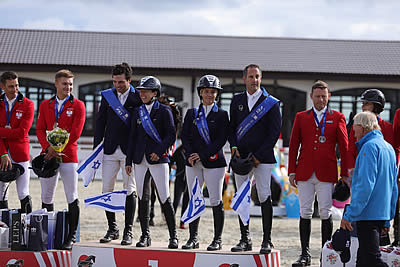 In a cliff-hanger of a competition, Team Israel made history when snatching the single spot on offer at the Olympic Jumping Qualifier at Maxima Park in Moscow (RUS). This was the second of two special qualifiers for countries in Group C, the first staged in Budapest (HUN) where Ukraine came out on top.

“We were optimistic but there was a lot of pressure this afternoon. But these guys, they made it; all of them are magnificent; they’ve all done a great job and the second round was perfect! We are happy and this is historic – it’s the first time we will have Israel (Jumping team) at the Olympics!” said Amichai Alperovich, team sports manager.

However, the victory was a very narrow one, just a single fault separating the winning foursome of Daniel Bluman (29), Ashlee Bond (34), Elad Yaniv (41), and Dani G. Waldman (34) from the Polish side that consisted of only three team-members. They put up a really gutsy performance and held the lead at the halfway stage, but a single second-round fence error meant the ticket to Tokyo 2020 would go Israel’s way.

In contrast to most of Europe which has been experiencing sweltering heat this week, it has been cold, and extremely wet, in Moscow with maximum temperatures of around 8 degrees. “Yes it’s raining, but it’s the same for everyone!” said Israeli team coach and former Olympic, World, and European champion Jeroen Dubbeldam.

A total of six nations lined out and both Azerbaijan and Kyrgystan, who also sent out three-member sides, were eliminated in the first round, leaving four countries to battle on in round two. However, it was already a two-nation contest at this stage, with Poland out in front carrying 13 faults chased by Israel with 15 on the board as the action resumed. Russia was next in line with a 42-fault scoreline while Uzbekistan returned to the ring with 60 faults on their scoresheet.

The course designed by Olaf Petersen Jr. was no walk in the park, and only four horse-and-rider partnerships managed to get home inside the 78-seconds time-allowed in the first round. The oxers at fences three and six fell on numerous occasions, and the triple combination at fence seven required caution to get the distances just right. Russian chances were shaken when Vladimir Tuganov’s Tulum took a dislike to the open water at fence nine in both rounds, while the final line that began with an intimidating wall followed by a double and then a sharp left-hand turn to a liverpool proved the undoing of many.

Israeli pathfinder, double-Olympian Daniel Bluman, made it all look pretty easy when registering just a single time fault first time out with Ladriano Z, but when Ashlee Bond and Chela LS added 12 and Elad Yaniv and Alvaro du Gue also ran into trouble on the run home to finish with nine, they began to look vulnerable. Not even the hugely experienced Dani Waldman and Lizziemary escaped unscathed as they racked up five faults for a pole off the middle of the triple combination and one for time.

Poland didn’t get off to the best start when Andrzej Oplatek and Stakkatan left two on the floor, but when Jan Bobik and Chacco Amicor produced the only complete clear of the first round and the only mistake made by the anchor partnership of Krzysztof Ludwiczak and Nordwind was at the wall, with a time-fault also added, then their tally of 13 gave them a two-fault advantage over Israel as round two began.

And when Oplatek produced a brilliant clear second time out, then that piled the pressure on Israel, because Bluman once again posted a single time fault while Bond added eight more to her tally. But Yaniv rode to the rescue with a zero score and then all the pressure was on Polish shoulders once again. So when Bobik faulted just once, at the tricky oxer at fence six in an otherwise foot-perfect second run, then the result would lie in Dani Waldman’s hands.

No matter what would happen Poland could finish with no less than 17 on the board while a clear from the Waldman would see Bond’s eight faults dropped from the Israeli scoresheet when the best three results were counted, leaving them with just Bluman’s single time fault to add for a total of 16. And that’s exactly what she did, the lady who changed her surname from Goldstein to Waldman when getting married just four weeks ago steering the great chestnut mare that has carried her to the top of the sport through a fabulous round to clinch it.

Poland’s Ludwiczak wrapped up the afternoon with only the fifth clear performance of the day, but his country would miss out on that Tokyo ticket by an agonising one-fault margin.