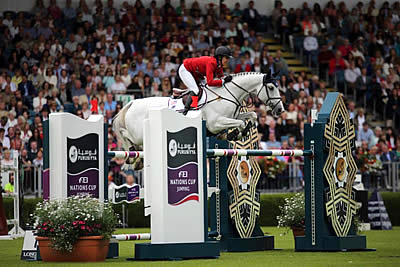 Dublin, Ireland – The United States overcame immense pressure to tie with Sweden for the Bronze medal at the Furusiyya FEI Nations Cup™ presented by Longines at CSIO5* Dublin, Ireland. The Hermès Show Jumping Team of Georgina Bloomberg, Lauren Hough, Laura Kraut, and Jessica Springsteen battled a tough field to extend its podium success in Nations Cup competition. In an intense jump-off, Italy went clear to snatch the Gold medal on zero faults from the home team of Ireland, who claimed Silver on six faults.

“Obviously, we always want to win, and be in the jump-off. The Irish and Italians were very strong, and we knew that going in. We had a couple nine year-old [horses]. To have a podium finish, I was very proud of them and their performance,” said Chef d’Equipe Robert Ridland.

The U.S. entered the second round tied for first place with Ireland and Italy. Sweden narrowly trailed with four faults. Every jump counted, and the U.S. needed clean performances in the second round to remain medal-worthy. Hough and Ohlala were unable to match their first-round performance and finished with eight faults. She and the mare had rails down at the Harp oxer, obstacle three, and the Furusiyya oxer, obstacle seven. Springsteen and Cynar did not jump a second round so it was up to Bloomberg and Kraut to carry the team through.

“To not have him [Cynar] go in the second round put huge pressure on the other three so that every fault was going to count from that point on. That’s Nations Cup pressure, in front of an absolutely packed house in Dublin, one of the most important Nations Cups of the calendar year,” said Ridland.

With Sweden right on the U.S. team’s tale with eight faults and Springsteen’s second round score dropped, the U.S. needed Bloomberg and Lilli to jump clear. They knocked one rail at the Furusiyya oxer for four faults, leaving them tied with Sweden going into Kraut and Cavalia’s final attempt on the course. The young combination delivered a perfect round to end the day with a double-clear and solidify a tying Bronze medal effort.

“I thought they did a great job. For us to end up in the medals and tied for third is a great finish. Laura’s double clear on Cavalia and it being her [Cavalia’s] first Nations Cup, and only being nine years old, it was just a tremendous finish,” said Ridland.