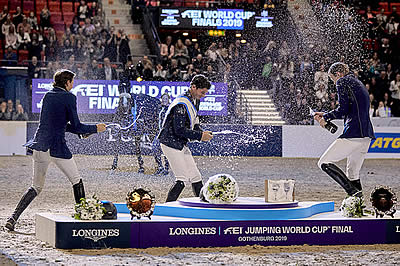 Switzerland’s Steve Guerdat (36) showed exactly why he is the No. 1 rider in the world right now when holding his nerve under the most intense pressure to take the Longines FEI Jumping World Cup™ 2019 title at the Scandinavium Arena in Gothenburg (SWE). This was his third time to lift the trophy in the long history of the prestigious series, and his glorious win sees him join an elite group of three-time champions.

He had thrown down the gauntlet when topping Thursday’s opening competition, but a fence down on Friday saw him come into the two-round finale in third place, and two points off Spain’s Eduardo Alvarez Aznar (35) at the head of the leaderboard. Guerdat wondered if his 11-year-old gelding Alamo was ready to step up to the level of sport they faced. The horse had never jumped courses as big as this before. Course designer, Spain’s Santiago Varela, set them an enormous test, but Alamo didn’t crumble.

“I was a bit unsure going to the final today as this is his first championship and I was a little nervous on Friday after the speed class, but in the end he has been amazing all week!” said the man whose won his first title in Las Vegas (USA) in 2015 and his second in Gothenburg a year later.

There were only five first-round clears, and Guerdat moved into pole position when Alvarez Aznar dropped out of contention with two fences down, and second-placed Swede, Peder Fredricson (47), faulted once with Catch Me Not at the bogey water-try vertical at fence 10 on the tough 13-fence track to the dismay of the crowd. But the home hero and reigning European champion was still very much in the hunt, in third carrying five penalty points as round two began with Guerdat at the head of affairs carrying two, but only a single point ahead of fellow-countryman Martin Fuchs (26) and Clooney who had three on the board.

You could hear a pin drop when Fredricson returned to take on the simply colossal second-round track, but there was an explosion of sound when he brought his grey gelding home with nothing to add. The Swiss pair now had no breathing space: any mistake would ensure a Swedish victory, but Fuchs didn’t falter, Clooney showing all the class that secured individual silver for his talented young rider at the FEI World Equestrian Games™ in Tryon (USA) last September.

Now Guerdat had no room for manoeuvre – nothing but a foot-perfect run would do. Alamo showed a little inexperience on the way but there’s nothing quite like a horse that gives you everything it’s got, and the Dutch-bred did just that to bring it home.

“It’s up to the horse to jump the fences, so I really tried to focus on my riding and give the him his best chance, and he responded really well,” Guerdat said. He’s growing ever-fonder of Alamo, although he admitted that the horse he holds closest to his heart will always be his great partner Nino des Buissonnets who carried him to Olympic glory in London seven years ago.

It was a bit of a frustrating result for Fuchs because he has now finished second in two major events, last year’s World Championship and the Longines FEI Jumping World Cup Final. “But if I have to be beaten it is great if Steve wins; he is my friend and training partner. Clooney was amazing; he jumped both rounds easy; he is one of the best horses in the world. Two times second place is already a great achievement, and I am already looking forward to the European Championships this summer!” he said. That top step of the podium will surely come their way very soon.

But it was Guerdat who reigned supreme, and he now joins an elite group of three-time World Cup winners that includes Germany’s Meredith Michaels-Beerbaum and Marcus Ehning, Brazil’s Rodrigo Pessoa, and Austria’s Hugo Simon, the man who won the very first title in Gothenburg in 1979.

“When I was young, I used to dream of winning the World Cup, and when I finished second twice I wondered if it would ever happen. So when I won in 2015 it was very special, and to win here in Gothenburg the next year was even better, because this is such a great show; the crowd is like nowhere else and the atmosphere is unbelievable. To win three times, and to do it in Gothenburg again today – this makes me very proud!” — Steve Guerdat (SUI)