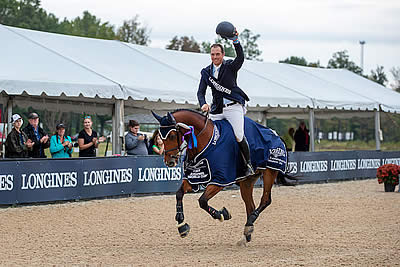 With a field of Olympians, young rider champions, and a former World No. 1 rider assembled for the $135,000 CSI3*-W Longines FEI Jumping World Cup™ Columbus (USA), a close finish seemed inevitable. Then Alex Granato (USA) entered the ring with Carlchen W.

Granato, 36, and his longtime mount set themselves apart to record a dominant victory over a competitive jump-off field of 12. The duo crossed the timers of Olaf Petersen, Jr.’s (GER) shortened course nearly two seconds fastest, with a final time 44.26 seconds. Margie Goldstein-Engle (USA) and Dicas finished second with a jump-off time of 46.20 seconds, while Nicole Simpson (USA) and Akuna Mattata completed an all-American podium; that duo’s time was 46.91 seconds.

“I know I have a quick horse. I wanted to get a good pace started early, so I tried to get a big open canter [and] from there to stay on the pace. I tried to stay focused and keep [my horse] focused on me and the plan, rather than getting too anxious and getting ahead of ourselves.” — Alex Granato (USA)

The win marked the duo’s second Longines victory after racing to the top of Wellington’s (USA) leg at the end of last season. In the time since, the duo contested their first major championship when representing Team USA at the 2019 Pan American Games in Lima (PER). There, they earned a team bronze medal.

“We shifted gears from Wellington,” Granato said. “We spent the winter focused on just me and the horse, on our [Longines World Jumping Ranking] and our consistency, and we had a super winter. From there, we focused more toward team events. We did the [Longines FEI Jumping Nations Cup™ Mexico], and from there we geared toward the Pan Ams. Now, I’m trying to refocus back again on us, just the partnership between me and him, so we can focus toward [the 2020 Longines FEI Jumping World Cup™ Final].”

“I want to put my focus toward World Cup Finals,” Granato said. “[Carlchen W] will jump at two more events this year, both World Cup qualifiers. Hopefully we can continue off this [result] and get some good points to be in the game early, so we can coast through the winter circuit to focus on the Final.”