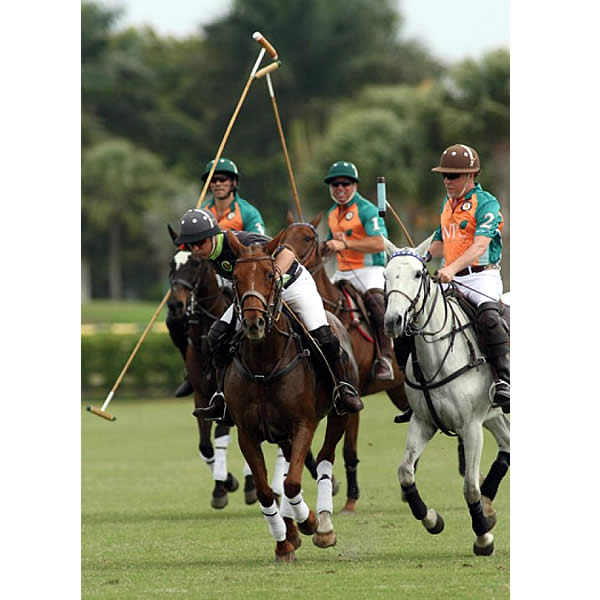 Polo Gear USA/Palm Beach Rox advanced on Friday with a thrilling 5-4 victory over Wellington Coalition on the opening day of the two-day tournament.

The championship final begins 3 p.m. in front of an expected sellout crowd.

Wellington Coalition and Cedar Crest Stables will play for the Founder’s Cup Trophy at 1 p.m.

Polo Gear USA/Palm Beach Rox has finished runner-up the past two years. The third year may just be the charm for the team.

In the opening game, Jean-Marc Herrouin led scoring with three goals including a perfectly placed neck cut shot early in the game and winning goal with two seconds left in regulation time.

Teammate Dan Haynia added two goals, including one on a penalty shot.

Herrouin, based in Los Angeles, is the only returnee off last year’s Polo Gear USA/Palm Beach Rox team.

“I was just in the right place at the right time,” said Herrouin, who played well on both ends of the field deflecting Wellington Coalition goal attempts while taking Hall’s well-placed passes and scoring.

“It was a great surprise; I am thrilled and happy,” said Herrouin, a sixth-year player. “We all played well and safe and we’re in the finals tomorrow. Jeff Hall was great; we had a meeting and strategized. We thought we had a shot. We just went out and applied all the things we learned.”

“Every year it gets better and better,” McKenney said. “The teams were evenly-matched and the games were incredible. Our team played well as a team. Jeff was amazing; he is so flawless and elegant to play.

“It’s nice to be in the final,” McKenney said. “It’s wonderful to plan it and I am thrilled to enjoy it with everybody. At the end of the day I am also a polo player and I want to win. I have been playing in the desert the last three months preparing literally just for this weekend. I’m glad I did; it seemed to work.

“It wasn’t a runaway victory; it was neck-and-neck and anybody’s game. At the end we eked out with one more goal so we are in tomorrow. It’s going to be a very competitive game. Gordon is a really top-notch player and his team is super strong.”

In the second game, Gordon W. Ross/Team Re/Max had a little added incentive playing in front of the world’s greatest polo player, Adolfo Cambiaso, his wife Maria and children Mia and Adolfito, both junior polo players.

Ezequiel Ortiz Berne, a Cambiaso family friend from Argentina, was a late addition to the lineup for an injured player.

Berne, making his GPL debut, played well along with teammates Gordon Ross and pro Juan Bollini, who each had two goals and Gina Padilla, who scored one goal.

“It’s fast but I feel comfortable,” said Berne, who rode some of Cambiaso’s ponies. “Both Adolfo and Maria are my coaches. I started playing polo last year on Adolfo’s farm and I have been playing with Adolfito.

“This was fun; we are in the final,” said Berne, a part-time model who spends holidays in Miami and Wellington and works in public relations for La Dolfina in Argentina.

Added McKenney, “It was more than a thrill to play in front of Adolfo Cambiaso. Not only that but he has invited the GPL to put on a tournament at his place in Argentina and we are going to. It’s awesome.”

Bollini, a member of last year’s winning team and GPL veteran pro player, was impressed with the skill level of the teams this year.

“The players have improved so much and are very competitive,” Bollini said. “The first year they were more at the beginning stage but now they are putting good games together and following game plans.”

Bollini marked Frenchwoman Caroline Anier of Cedar Crest Stables throughout the game. Anier more than held her own and scored all three of her team’s goals.

Bollini stole the ball from Anier just as she was about to score a goal in the opening chukker.

“She is a very good, tough player,” Bollini said. “She was rated at four goals. She played very well. I was bumping her but she was bumping me, too. I had to defend her.”

In addition to the games, Saturday’s extravaganza will feature music, food, entertainment including a dressage exhibition, and vendor tents.

The tournament is being hosted by Grand Champions Polo Club and Marc and Melissa Ganzi. Melissa Ganzi, newly-elected president of the Museum of Polo and Hall of Fame, selected the well-matched teams and provided most of the ponies for the tournament.

The Gay Polo League, created in 2006, is an international organization and only known gay polo league in the world. Currently, the GPL’s established four U.S. chapters are in Los Angeles, San Francisco, New York and Wellington.

Where: Grand Champions Polo Club
On the corner of South Shore Boulevard and Lake Worth Road

For Tickets: at the gate or go to http://www.gaypolo.com/the-event/.