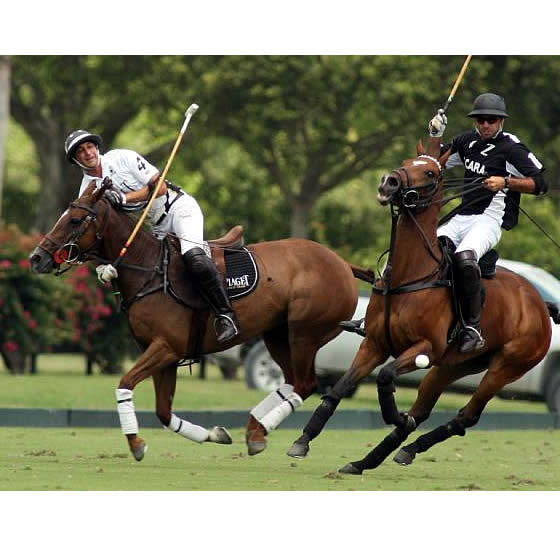 The loss eliminates Piaget from U.S. Open play. The Grand Champions Polo Club-based team will now play Faraway in the Hall of Fame Cup on a date still to be determined.

Nacho Novillo Astrada got the call from his older brother Wednesday afternoon in Buenos Aires, hopped a plane for the nearly nine-hour flight to South Florida and still showed no signs of jet lag.

“I slept a little bit during the night, it was a nice flight,” Astrada said.

The fourth youngest of five brothers and rated at 9 goals, Nacho Novillo Astrada, 35, found obvious chemistry with not only his 37-year-old brother but also 23-year-old 6-goaler Nacho Badiola and team captain Melissa Ganzi.

The makeshift lineup was pulled together after 10-goaler Sapo Caset suffered a pulled groin against Alegria on Monday and was advised not to play by doctors and his trainer.

Nacho Novillo Astrada took time off from his season with La Aguada to play for Piaget.

The Novillo Astrada brothers are the family behind the legendary La Aguada high goal team in Argentina. In front of their 90-year-old grandfather Julio and father Taio, both polo legends, brothers Eduardo, Miguel, Javier and Nacho Astrada won the 2003 Argentine Open.

“I was able to adjust quickly because the horses were good and my teammates were good players, too, and the high goal game is quick,” Nacho Novillo Astrada said.

“It takes more than chemistry between brothers but we do play quite a lot with me at back and him at three,” Nacho Novillo Astrada said. “We tried to make a game plan that was real easy. We did not get too complicated so we could get to know each other quickly.

“We tried to play as best as possible. Zacara is not only a good team but they played last year together and we just played this one game.”

The other Astrada brothers are Eduardo, 40, Javier, 36, and Alejandro, 31. The Astrada siblings were born and raised on the outskirts of Buenos Aires. Their grandfather would pile them in his truck and take them to and from polo games in Buenos Aires. Their father was a 9-goaler in his prime.

“We were lucky our little sister Veronica came as the sixth child, if not, we were going to make a soccer team of 11 boys and have our parents keep trying for more children,” Eduardo once said.

Nacho Novillo Astrada gave Zacara fits all day with his ball-hawking defense and long, deft passing to his teammates.

One of Piaget’s most memorable plays of the day was when Badiola, making his IPC high goal debut this season, perfectly timed his run in front of the goal mouth to block Facundo Pieres’ penalty-three goal attempt with 2:12 left in the fourth chukker.

“We were waiting to see what was happening with Audi to see if they made it,” Miguel Astrada said. “If they didn’t qualify we were going to play with Gonzalito Pieres. Nacho was the back-up plan.

“It was very tough for Nacho; he had to fly last night and flew in this morning. He played very well despite having to adjust to the lineup. He did a really good job. We played the last three years together here in the 26-goal so we know each other very well. It’s very easy for us.

“This is our first year together playing the Open,” Miguel Astrada continued. “It takes time to get organized. Sometimes you do really well the first year; it takes a little bit of planning ahead. I think we can start getting organized with time for next year. We should do better next season. We learned from this season.”

Ganzi returned to her Piaget lineup and played well despite a still healing pulled right groin and hip flexor.

It was another close loss for Piaget, just three days after dropping an 8-7 decision to Alegria a different makeshift lineup that included Juan Bollini, Lucas Lalor and Matias Sosa.

Trailing 1-0 after the opening chukker, Badiola drove downfield and scored on a perfectly-angled cut shot to tie the game at 1-1 with six minutes left in the second chukker. Miguel Astrada’s goal at the 2:09 mark gave Piaget a 2-1 lead but it was the last time the team would have the lead.

“Nacho and Miguel Astrada played a lot together and that makes a big difference,” Piaget coach Joey Casey said.

“Zacara is a good team, one of the best teams in the Open and we played well but it was going to take a perfect game to beat them,” Casey said.

“We just had some bad luck. We’re going to have to regroup and get ready for next season. Overall this year we were close and played well. We were close in the Gold Cup in every game, pretty close in this tournament. We had one bad game and that was against Orchard Hill. At the end of the day, you’ve got to win to advance and we didn’t.”

If there was an MVP awarded in the first of three games on Thursday, it most certainly would have been recent Hall of Fame inductee Mike Azzaro, playing well above his 7-goal rating at both ends of the field.

The U.S. Open Polo Championship, first played in 1904 at Van Courtland Park, celebrated 100 years in 2004. It is one of three major polo tournaments worldwide along with the British and Argentine Opens. It is also the third jewel of U.S. polo’s 26-goal Triple Crown that includes the C.V. Whitney Cup and USPA Piaget Gold Cup.

Since 1996, the U.S. Open has been held in South Florida. In 2005, Julio Gracida added to the Gracida family’s combined record of 36 U.S. Open Polo Championship wins.