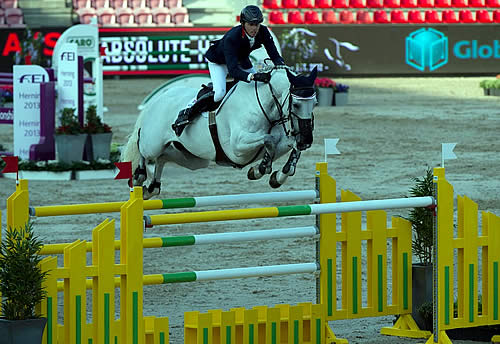 Herning (DEN), 20 August 2013 – The PSI FEI European Jumping Championship 2013 got off to a great start in Herning, Denmark tonight with a thrilling victory for Great Britain’s Ben Maher and Cella, while the French quartet of Aymeric de Ponnat, Roger Yves Bost, Patrice Delaveau and Kevin Staut head the team standings.

The British lie second going into tomorrow’s first round of the Nations Cup-style team competition, with Switzerland in third ahead of the defending champions from Germany in fourth place.  A total of 19 teams lined out in tonight’s opening Speed class in which four seconds were added for each fence down, and, with results converted into points, just two fences separate the top seven nations as the action resumes tomorrow (Wednesday) morning.

Maher, a member of Great Britain’s London 2012 Olympic Games gold-medal-winning team, is followed closely on the individual leaderboard by individual Olympic champion Steve Guerdat from Switzerland, while French rider Roger Yves Bost is in third ahead of Portugal’s Luciana Diniz in fourth place.  Kevin Staut’s fifth-place finish helped to anchor the French advantage in the team rankings. But despite the fact that Jens Fredricson and defending European individual champion Rolf-Goran Bengtsson filled the next two places tonight, the Swedish team could only manage to slot into seventh place as the course designed by Germany’s Frank Rothenberger took its toll.

From a starting field of 78 runners there were 21 clear rounds over the 13-fence track. The opening vertical was the only obstacle to remain intact throughout the competition, and the faults began in earnest at the double – oxer to water-tray vertical – at fence five which was followed by a vertical at six before a sweeping turn to the oxers at fences seven and eight.  The rollback to the vertical at fence nine provided an opportunity to shave off valuable fractions of seconds, but some paid the price at the following vertical at 10 before turning down the most difficult line of all.

Just three fences from home, Rothenberger set them an airy liverpool oxer framed by brightly-coloured pencil poles, and this proved very influential indeed.  However it was the following triple combination that claimed the maximum number of victims, with over 30 horse-and-rider combinations faulting here before turning right-handed to the final oxer.

Ireland’s Shane Sweetnam and the ever-reliable Amaretto Darco were first to go, and their effortless clear in 81.08 seconds left them out in front for some considerable time.  But they would have to settle for twelfth place in the final analysis and it was Jens Fredricson’s brilliant gelding, Lunatic, who was quickest around the track when breaking the beam in 74.90 seconds only to leave the very last fence on the floor for an additional four-second penalty.

Team-mate Bengtsson produced a cool clear from Casall Ask, and in seventh spot is well-situated to defend his title over the coming days.  It was Bost’s time of 77.47 seconds that set the first major target however.  The Frenchman’s super rollback to the vertical at nine and the extraordinary pace of his brilliant mare, Castle Forbes Myrtille Paulois, really put it up to the rest of them.

But Maher has built an exceptional relationship with the grey mare Cella which he has only been riding since the beginning of the year.  They have honed themselves into a formidable partnership, and as the British rider dared her to down to her fences today she seemed to relish the challenge, storming home in the winning time of 76.31 seconds.

Guerdat and his Olympic gold medal winning ride, Nino des Buissonnets, set off on their determined run in the closing stages.  The 12-year-old gelding always likes to go like the wind, but their time of 76.89 seconds wouldn’t be quite quick enough.  He said afterwards, “At the combination I maybe got a little chicken! But I thought of the days that are coming and I took my horse back a bit there.  I’m very happy with the way my horse jumped, and I don’t think I took too much out of him today,” he explained.

Calculating just how much to ask of horses over the early days of these Championships is key to success, and tonight’s winning rider, Maher, understood that too.  “From experience I know it’s important to be good again the following day… so I didn’t take every single risk.  In the end one fence down and fast is better than clear and slow.  Cella is naturally a fast horse so I just let her run and jump, and she did most of the work for me!” he insisted.

Maher said he believed his winning edge may have been achieved by his gallop down the last tricky line of fences. “The liverpool to the triple combination… was eight or nine strides.  I did eight and she (Cella) jumped the combination very well,” he explained.  Now it’s a matter of looking forward and staying out in front.  “It’s always good to be ahead on the first day so that if I jump more clear rounds the other riders still can’t catch me,” he said tonight, adding that Championship titles “can be lost on Day 1, but they can’t be won” (on the first day).

Guerdat however clearly has individual victory also in his sights.  Talking about his Olympic gold medal winning ride, Nine des Buissonnets, he mentioned this evening that his preparation for these Championships have been carefully managed. “I did a national show with him jumping 1.35/1.40m and a 1.50m Grand Prix but didn’t do the jump-off.  I try to save him because I want to have him as long as possible and to bring him out for the big competitions.  He feels good,” said the Olympic champion ominously.

Some more clean jumping over the remaining two rounds of the Team competition will leave him well-positioned to challenge for the European title as the top-25 go through to Saturday’s Individual Final.

Firstly however, it’s still all to play for in the Team Championship, with the British trailing the French leaders by just 5.04 points as the action gets underway again on Wednesday morning.  And with the Swiss only another 0.27 points further behind in third place followed closely by Germany, Italy, Ireland and then Sweden it promises to be a right royal battle for the PSI FEI European Team Jumping Championship 2013 title over the next two days.

13 fences in opening Speed competition in which four seconds was added for each fence down.

This class counts towards both the Team and Individual standings.

Today’s results have been converted into points which are carried through to tomorrow.

2 eliminations, Angelica Augustsson (Mic Mac du Tillard) from Sweden who jumped fence 9 instead of fence six on her tour of the track and Russia’s Natalia Simonia (Kilar) who was unseated at the second fence.

France holds the lead in the team competition ahead of the reigning Olympic champions from Great Britain in second while Switzerland lies third going into tomorrow’s first round of the Nations Cup.

Course designer Frank Rothenberger – “I wasn’t surprised about (the difficulties encountered at) the liverpool near the entrance. The wings on this jump were 3m high at the side and the liverpool was dug into the ground so the horses were more spooky.  Normally (a liverpool) is on top of the surface, and there was also some grass decorating the edge which made it a bit spooky.”

Steve Guerdat (SUI) – “Always when you have a course with a lot of gallop to open up the horses, even if it didn’t look difficult, if you have an easy start and it builds towards the end, they course they feel it, and they get a bit lower.”

Ben Maher (GBR) – “Cella came to me since Christmas and had no experience on the European circuit.  Dublin was her last show, and I hadn’t intended jumping her in the Grand Prix but she needed the rounds and I’m very happy with her.”

For further information on the ECCO FEI European Championships 2013, go to website: http://european-herning.dk/GB.aspx.