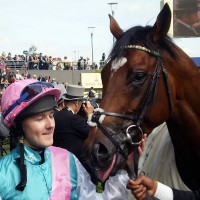 The Qipco Champion Stakes, Europe’s richest ten furlong race, brought Frankel together with his main rival, the French trained and next highest rated horse this year, Cirrus des Aigles. German trained Pastorius, winner of the German Derby, and Newmarket trained Master of Hounds Nathaniel, and Bullet Train (Frankel’s half-brother, stalwart pacemaker and stable companion) completed the prestigious line up. The much talked about contest was broadcast to 86 countries around the world and didn’t disappoint. Frankel’s slow and almost casual break from the stalls left pacemaker Bullet Train’s jockey looking back in angst. Mud loving Cirrus des Aigles took up much of the running with Nathaniel, the King George and Eclipse winner on his heels. Frankel settled into an easy rhythm mid race before Bullet Train picked up the pace leaving him to cruise up to the leaders about a furlong and a half from home. Any previous race nerves concerning recent rainfall and the ground quickly dispersed as Frankel took up his challenge and the crowd began to roar. With customary ease Frankel surged two lengths clear to victory – a class apart. Cirrus des Aigles battled on to take second place with Nathaniel a gallant third.

Officially declared the highest-rated horse in the world, Frankel’s 14 career wins out of 14 races have amassed winnings now totalling £3 million.

This perfect equine athlete will now retire to stud where he was born.