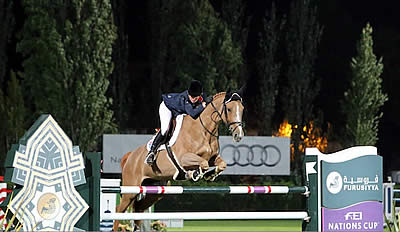 The first round of the competition was jumped in daylight, with round two taking place under floodlights at the Lisbon showground, and the host nation almost made it to a jump-off against the eventual winners but, in the final analysis, had to settle for joint-runner-up spot with Brazil. From a start-list of 10 nations, just eight qualified for the second round and it was the teams from Chile and Spain that were left on the sidelines when the action recommenced. And it was tough on the Spanish as they only lost out due to a slower combined time when sharing a 16-fault total with the USA at the halfway stage.

Ireland finished fourth, Italy fifth and the USA slotted into sixth while Great Britain and Morocco, who shared the lead with Portugal at the halfway point, slotted into seventh and eight spots respectively when things fell apart for them second time out.

Only Portugal and Italy were chasing points at this leg of the series, and their second-place finish provided a good boost to the host nation’s position on the Europe Division 2 leaderboard at the end of the day.

French Chef d’Equipe and former senior team rider, Thierry Pomel, described his feelings after tonight’s exciting competition. “I like riders that fight and give their all – which is exactly what these four riders did today. As you know, the starting order of the team is extremely important and Laurent with his new horse – after an eight year absence from the Nations Cup – made it seem as though he never stopped at all. Our two female riders did not start well in the first round but made it up amazingly in the second round. At the end of the day we are a team, and we won together!” he said of what was truly a great team effort.

The course presented by Portugal’s Bernardo Costa Cabral did exactly as he intended.

“I try to ensure the difficulties are spread around the course so the horse gets a good feel for the course whilst challenging the riders at the same time. The French win was fantastic and the fact they had eight faults in the first round and clears in the second round under the floodlights with young horses – that is a greatest compliment I could have been served today,” he said.

There was plenty for them to jump, with several fences standing a full 1.60m high including the vertical at six and the wall at fence 11 while the triple combination at fence eight – vertical, oxer, vertical – fell frequently as riders often found the second distance a little long. The open water, 3.70m wide, was bright blue and a little intimidating but there were no tricky distances to catch them out.

Pathfinder Goffinet went clear for France in the first round with his 10-year-old French-bred Qantar des Etisses and anchorman, Cedric Angot, did likewise with his nine-year-old Rubis de Preuilly but the French were sharing an eight-fault first-round total with Brazil and Italy when both Nicolas (Mozart de Beny) and Demonte (Rhune d’Euskadl) each had two fences down.

The Portuguese, British and Moroccan teams meanwhile were out in front with just a four-fault scoreline and looked set to battle it out between them as round two progressed. And Portugal’s second round began with a clear from Mario Wilson Fernandes and Zurito do Belmonte to keep them well in the race. But when Joao Chuva (Virginia Dream), Luis Sabino Goncalves (Imperio Egipico Milton) and Marina Frutuose de Melo (Coltaire Z) all made single mistakes they lost their grip to finish on a 12-fault total.

Plummet down the order

The British added a massive 29 faults second time out to disappear from contention while the Moroccans also went into freefall with 32 more on their scorecard, but the Brazilians made the perfect start to the second round with another lovely clear from their new young star, Marlon Zanotelli, riding Clintash. And even though second-line rider, Stephan de Freitas Barcha, collected a colossal 34 faults with AD Jac’Poles they could drop that when Pedro Veniss (Rissoa ‘AG Bois Margot) went clear and last-line rider Bernardo Alves (Starling 7) left just one on the floor to put them on level pegging with the host country.

Despite a double-clear from Daniele A Da Rios and For Passion the Italians added 20 more to their tally to finish on 28 while the Irish were obliged to count the nine faults picked up by Alex Duffy at his second attempt with WCE Cruco when Niall Talbot’s Nicos de la Cense, eliminated for refusals in the first round, threw in another objection second time out when they racked up 18 faults. Clears from both Thomas Ryan (Caribo) and army rider Captain Michael Kelly (Ringwood Glen) steadied the ship, but fourth place was as good as it would get.

The USA fielded a team of young riders who collected 16 faults in both rounds – Alise Oken and Teirra producing their only clear performance of the day – and it was three second-round clears that clinched it for the eventual winners. Angot was not obliged to return to the arena in round two as the his French team-mates had it already sewn up, Nicolas and Demonte redeeming themselves after their first-round errors with foot-perfect second efforts.

It was all about gaining experience and getting to know new horses where the winning side was concerned, except for Demonte, who has partnered Rhune d’Euskadk for the last two years. “My horse won the Seven-Year-Old Championship in France, and at eight years we were on the winning Nations Cup team at Bratislava last year,” the rider explained. “I didn’t go indoors with her during the winter but we went well in the 3-Star at Le Touquet and I jumped her on the team at the Nations Cup in Odense and we were second in the Grand Prix there. After we came back she returned to the stables for a week and then we came here. It is a lot different to Odense where everything was very tight – this is a big ring and it was perfect!” added the rider who was on the three-member French team that won the FEI Nations Cup™ in Porto Alegre, Brazil two years ago.

Demonte felt there was good learning for the horses also due to the change of environment between the two rounds of jumping. “It is good for the horse to have develop the adaptability of jumping one round in a set of circumstances and the other in another (under the floodlights). The horses need to learn to perform in this type of environment so why not start developing that skill today. The horses were jumping even higher in the second round!” she pointed out.

Caroline Nicolas said, “This was the perfect show to improve my relationship with my horse which is what we came here for – it’s great!” while for Lauren Goffinet it was a very special day. “I created this horse,” he said of his 10-year-old Qantar des Etisses, “and it was very important for me to use this show to introduce him and prepare him for the future,” he added.

Many will recall Goffinet’s fantastic exploits with his lion-hearted little stallion, Flipper d’Elle, who was a much-admired member of the French team during the heady years when Jean-Maurice Bonneau, now Chef d’Equipe for Brazil, steered France to dominate the FEI Nations Cup™ Jumping circuit. “My last Nations Cup was eight year ago and now I am preparing a young horse and will break into the first team once again with him,” Goffinet said confidently.

French Chef d’Equipe, Thierry Pomel, had plenty to be happy about tonight.

He praised the event, venue and organisers: “For me, Lisbon is a great show and I think it is the best second division show because it is of the standard of the best show in Division 1. The arena and the ring overall is super! I hope there will be even more teams competing in the competition next year,” he said.

The French of course of defending series champions and compete for points only in Europe Division 1. Thierry Pomel continued: “The show today was used as a means of preparing different horse/rider combinations with an eye towards the World Equestrian Games that are coming up,” and he talked about the concept of the Furusiyya series which encourages the growth of the sport and the constant development of both horses and riders.

“As far as the French Equestrian Federation is concerned, it is their mission to send riders to the second division who need to develop their relationship and combination with their horse in order to create the next generation. Our stance in this regard – Philippe Guerdat (Chef d’Equipe) and Sophie Dubourg (French Selector) in particular – is for them to decide on the riders selected. They want to give chances to riders that show glimpses of being able to qualify for the team. Competing at these types of show is a required step in order for that to happen, and today is proof of that great achievement,” he pointed out.

He said he wasn’t too surprised with how things worked out for his team tonight. “After the first round I still had a lot of belief and trust in my riders that we would do well as I know them very well. These two (female) athletes are fighters and I knew they would bounce back!” he said.

10 nations lined out, but only two – Portugal and Italy – were chasing points towards the Furusiyya FEI Nations Cup™ Jumping 2014 final which will take place in Barcelona, Spain in October.

This Furusiyya leg was also a qualifier for the Alltech FEI World Equestrian Games™ 2014 in Normandy (FRA) and for the FEI European Jumping Championships 2015 which will take place in Aachen, Germany.

8 teams returned for the second round.

The last rider for the French team, Cedric Angot (Rubis de Preuilly) who was clear first time out, did not have to jump in the second round because his team-mates had already secured victory.

Chef d’Equipe for the French team was Thierry Pomel.

The next leg of the Furusiyya FEI Nations Cup™ Jumping Europe Division 2 League will take place at Sopot in Poland on Friday 8 June.

Cedric Angot, FRA: “I come often to Portugal and I know what the courses are like here – I love it to be honest. The ring is perfect! I think the horses like to jump in this arena and these types of courses.”

Thierry Pomel, French Chef d’Equipe: “These athletes didn’t come here to get points; they came here to gain experience – a win is a win which is all that matters.”

Longines has been based at Saint-Imier (SUI) since 1832. Its watchmaking expertise reflects a strong devotion to tradition, elegance and performance. It has generations of experience as the official timekeeper at world championships and as a partner of international sports federations. Longines’ passion for equestrian sports began in 1878, when a timepiece was made with a horse and jockey engraved on the watch face. Over the years, the brand has built strong and long-lasting links with equestrian sports. In 1926, for the first time, the brand was involved as timekeeper for the Official International Equestrian Competition of Geneva.

Today, Longines’ involvement in equestrianism includes Jumping, Endurance and flat racing. Longines is a member of The Swatch Group S.A., the world’s leading manufacturer of horological products. With an excellent reputation for creating refined timepieces, the brand, whose emblem is the winged hourglass, has outlets in over 130 countries.