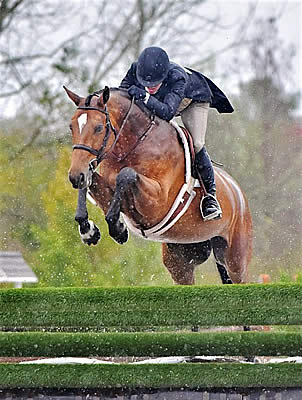 Rain or shine, the show must go on! Despite less than ideal weather conditions after four consecutive weeks of sunny skies, the $77,700 USHJA International Hunter Derby, presented by Brook Ledge Horse Transportation, took place in the Main Hunter Ring and saw 29 entries compete for the second largest international Hunter Derby purse offered in the country this year. The rain delayed the start but riders were able to relax in the Legend Lounge and enjoy a breakfast sponsored by Loretta Patterson and Accolade Farms.

The cutoff score after the Classic Round was 160.5 set by Chances Are, owned by Artillery Lane, LLC and ridden by Gregory Prince of Sherborn, Massachusetts. Their Handy Score of 102 for a combined total of 262.5 would see them finish in twelfth place overall.

Rebecca Patterson’s Vecchia Murano, ridden by Amanda Forte of Glenmoore, Pennsylvania, followed Prince after earning a first round score of 161. An overall second round score of 115 for a combined total of 276 saw them finish in eleventh place overall.

Julia Curtis of Villa Rica, Georgia and her own Rocoso followed Forte in the Handy Round after earning a first round score of 166. Their second round score of 179 for a total of 345 saw the pair move into eighth place overall.

Holly Shepherd of Grand Bay, Alabama in the irons of Barbar Risius’ Longstreet followed Curtis in the Handy Round order after earning a Classic Round score of 167.5. Their second round score of 177.5 for an overall score of 345 would have them finish in ninth place overall.

Kelley Farmer had eight horses in yesterday’s Derby and had four return for the Handy Round. Farmer’s first ride was in the irons of her own Need I Say. “I bought him to be a Derby horse. He won two in Pensacola and was sixth in $100,000 in Ocala,” commented Farmer. “He’s a great pinch horse and can jump no matter what the conditions,” she said. “If I ride him earlier in the class I can always try something different with him that I might be able to use on my later rides,” she continued. “He has a tremendous amount of ability and is so nice to ride,” she added. The pair earned a second round score of 194 and combined with their Classic Round score of 169, their combined total of 363 would find them moving up to finish in sixth place overall.

Farmer followed that round with Amanda Hone’s Publicized after earning a Classic Round score of 170.5. “Publicized is one of my greenest,” commented Farmer. “He’s a very fancy First Year horse and has only shown six times,” she said. “I was proud of him that he jumped the Derby and overcame the weather,” she added. Publicized and Farmer earned a Handy Round score of 132 for a total score of 302.5 and would finish in tenth place overall.

Fleur De Lis Farms’ Bowie, ridden by Courtney Calcagnini of Bartonville, Texas, followed Farmer and Publicized after a first round score of 173. Their Handy Round score of 179 for a total of 352 would see them finish in seventh place overall.

Tim Maddrix of Leeds, Alabama and Alina Dumitrescu’s Shutterbug earned a Classic Round score of 175. Their Handy Round score of 194 for a combined score of 369 saw the pair finish in fifth place overall.

Farmer returned to the ring, this time in the irons of Kensel, LLC’s Mindful. Farmer and Mindful received a first round score of 177 and a Handy Round score of 198 for a combined score of 375. “Mindful is a fantastic horse. He has won fifteen Derbies and he won Ocala a week ago,” said Farmer. “He’s been Horse of the Year twice and there is nothing Mindful cannot do,” commented Farmer. “He’s a great horse and overcomes all situations,” she said. Mindful finished in third place overall.

Jennifer Alfano of Buffalo, New York and her own Miramar followed Farmer and Mindful in the Handy Round after earning a Classic Round score of 178. Their second round score of 198 for a combined total of 376 would see them temporarily take the lead.

Shepherd and Loretta Patterson’s Triompf followed Alfano in the Handy Round after earning a first round score of 180. Their second round score of 190 for a total of 370 would see then finish in fourth place overall.

Farmer and Jane Gaston’s Baltimore were the final ride in the Handy Round. The pair earned a first round score of 182. Their Handy Round score of 205 for a combined total of 387 would earn them the win! “We are so excited about his win,” commented Farmer. “This is his first Derby win and only his second Derby ever. His first Derby had him finish second in Ocala,” she said. “Baltimore is one of my newest additions. I haven’t had him long but he is quickly fitting into our group,” she said.

“I have to give a lot of credit to Bob [Bell] and his show management team,” Farmer continued. “They did their absolute best to put on a lovely class,” she said. “The weather was wet, but no one was slipping in the ring and we had a lot of water here,” she said. “For them to offer this large amount of prize money and invest in the hunters is a trend I hope more horse show managers follow,” she said.

“I had a couple that handled the weather and footing better than others and that’s kind of a given and that’s why we have the amount and depth of horses we bring with us. There’s always one of them that is more suited to the conditions and ring than the others,” she said.

“We were all really excited to ride on the grass grand prix field, but the weather prevented that from happening – there was nothing anyone could do about that,” she said. “We had a lot of rain here and given the conditions, the footing was fine. No one slipped in it. It was more a matter of some horses getting bogged down in the water because some horses are just more comfortable and deal with the different conditions better than others,” she said. “We have shown many places where the weather we had would have prevented us from showing at all. That was not the case here,” she added.

“We haven’t shown on this circuit and are having a great time here,” Farmer continued. “Everyone here has been nothing but accommodating,” she said. “We appreciate the horse show putting up real prize money for the Hunter Derbies because these classes do a lot for the Hunter industry. We will continue to support these shows that invest in the hunters wherever they may be,” she said.

“The only downfall I can see to this circuit is the great food they have around here,” Farmer laughed. “It’s so good I’m going to gain weight here,” she said. “I’ve been to The Half Shell, a barbecue place around the corner and they served us breakfast and lunch here at the show yesterday and pizza today. I’m sure I’m putting on the pounds,” she laughed.

“We are proud to have produced the second largest International Hunter Derby purse in the country this year,” commented Bob Bell, President of the Gulf Coast Classic Company. “The weather was less than desired, but our team and the KCR footing we have in our rings allowed us to continue with the much anticipated $77,700 USHJA International Hunter Derby, presented by Brook Ledge Horse Transportation,” he said. “We appreciate KCR and Brook Ledge’s sponsorship of our shows and the great response we have received from the Hunter riders,” he added. “We look forward to continuing to offer large prize money Derbies next year and make the Gulf Coast Winter Classic the choice of top hunter riders around the country,” he added.

For those who didn’t get to see the action live, click here to watch the livestream.

For those looking to reserve stalls for the final week of the Gulf Coast Winter Classic, email jonathan@classiccompany.com and then go online to horseshowsonline.com and enter for no additional fees. All sponsorship and media inquiries should be directed to lisa@classiccompany.com.