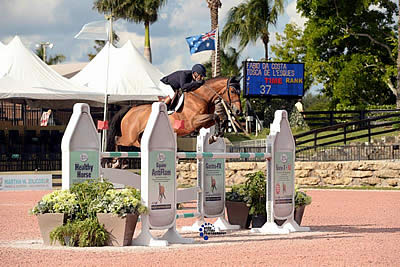 Guilherme Jorge (BRA) set the final track for the week, which welcomed back six of the original 40 entries in the jump-off. Emanuel Andrade (VEN) and his own Ricore Courcelle, a 2005 Selle Francais stallion (Quaprice Bois Margot x Alme), took home second place honors after contesting the jump-off and crossing through the timers in 45.833 seconds. Samuel Parot (CHI) rode to third place aboard his own Dazzle White, a 2008 Dutch Warmblood gelding (Calvino Z x Narcos II), after completing the short track in 42.236 seconds and adding four faults.

“Tosca De L’Esques was originally purchased as a ride for one of our clients last year,” commented Da Costa. “When we brought her from Europe she was already jumping the 1.40m classes and the client did really well with her. Shortly after, my own Grand Prix horse got hurt, so we decided to try the bigger classes with her.”

Da Costa and the mare, a 2007 Selle Francais mare (Cardento x Apache D’Adriers) owned by Bonne Chance Farm, returned to the jump-off sitting in second place and put in a fast round ending in 39.737 seconds. He continued, “She has done great at the higher levels, as she is doing more than expected of her right now. She’s such a fighter and she’s such a winner. She’s won over six classes in the past few months, so we have larger hopes for her looking into the future. We are planning to ride her this winter under the lights at WEF and if she goes well we will take it all step by step.”

Da Costa also piloted Fox Trot VD Padenborre, a 2005 Belgian Warmblood gelding (Chin Chin x Fleuri Du Manoir) owned by Bonne Chance Farm, to the fourth-place finish in the class. A long-term mount for the rider, the horse has returned from an injury and Da Costa hopes to ride him in the FEI World Equestrian Games™ Tryon 2018. He explained, “This horse was in the last trial for the Olympic games and was very successful in Europe. Unfortunately, when he got hurt we had to back off and it has taken a while to get him back to the higher levels of competition. It feels like he is finally ready to be back out here, so let’s see how it goes. If he is up for it, he is the horse that I would like to take to the WEG.”

The $1,500 Accuhorsemat Marshall & Sterling Adult Jumper Classic saw Sarah Warden of Sherborn, MA and KT Bolo, owned by Michael Kirby, finish atop the class after crossing through the jump-off timers in 35.269 seconds. Alliah Kassem of Fayetteville, GA and Dulrike Utica, owned by Taylor Land, collected second place with a time of 38.195 seconds. Francesca Damasceno of Palm Beach Gardens, FL and her own Chaco 34 finished in third place after securing a finish in 41.752 seconds.

Mandy Robert of Canada rode to victory aboard Ninja, owned by Ecuries La Montee, in the $1,500 Low Child/Adult Jumper Classic after stopping the jump-off timers in 46.675 seconds. Karyn Armstead of Chicago, IL and her own Cincinnati took second place with a time of 40.92 seconds and adding four faults. Anika Lozano of Guatemala and Roberto Daza’s Varcotique AC earned third place after an original course time of 67.746 seconds.

The $1,500 Marshall & Sterling Children’s Jumper Classic saw Bruna Silva of Windermere, FL and her own Lorenzo Jmen take first place with a jump-off time of 35.283 seconds and collected four faults, while Christina Rogalny of Wellington, FL and Sweet Oak Farm’s Esquire finished in second place with a time of 41.81 seconds and four added faults. Lillie Parr of Marshall, TX and Pinecone Farm LLC’s Beckham rounded out the top three with four faults and a time of 44.677 seconds.

The $1,500 NAL Child/Adult Jumper Classic saw Lindsay Tomeu of Wellington, FL and DBHC, Inc.’s Bonapart ride to top honors in the class after finishing their jump-off track in 28.946 seconds. Tomeu and Gold Lux, owned by Siboney Ranch, took second place after stopping the clock in 29.434 seconds. Bruna Silva of Windermere, FL and her own Lorenzo Jmen secured third place with a time of 32.164 seconds.

The $500 NAL/WIHS Child/Adult Hunter Classic saw Tracy Scheriff-Muser of Palm Beach Gardens, FL and her own Shoreline, finish atop the class with a two round score of 170. Kira Telford of Chicago, IL and CR Moet, owned by Telford, collected second place after completing their rounds with a score of 158. Isabel Beltran of Jupiter, FL and Alleala finished in third place, earning a score of 155.

The $1,000 Amateur Owner Hunter Classic boasted a win for Kaitlin Porath of Charlotte, NC aboard her own Breaux, as the pair rode to a final score of 175. Hillary Jean of Castle Rock, CO piloted D’Amour to second place honors after earning a 168. Third place honors were captured by Laura Sexton of Greenwich, CT aboard her own Set to Music after receiving a 167.

Caroline Passarelli of High Falls, NY and Stella Wasserman’s Spellbound finished atop the $500 Medium/Large Pony Hunter Classic. Emma Vandenhouten of Plantation, FL and her own Spiderman captured second place. Third place honors were presented to Alexandra Sica of Ridgefield, CT aboard her own Greystone’s Star Bright.