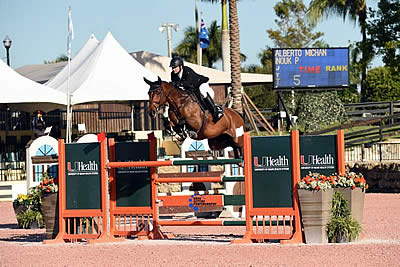 “I think that it was a big enough course for a speed class,” Michan described. “We saw Brianne Goutal go out early on and ride very, very fast, so I think that she set the bar high for the rest of us today and made us all take a serious shot at it. Because of that, we had to take strides out at almost every line and if you wanted to be in the top three you really needed to push it.”

The mare, most recently piloted by Belgium’s Nicola Philippaerts, is a new sale horse for Michan. Of his round, Michan explained, “We really considered whether or not we should push it and go really fast with her or not, but she is a very quick mare and has done very well with Nicola. We knew she was very experienced and has done it many times. We just went out there and went for it and she jumped unbelievably.”

Michan’s goal is to find someone who enjoys the mare as much as her previous riders have. Until then, he plans to continue taking her out at the Grand Prix level in the coming months. “We have a very nice group of horses here this winter and I have three or four horses to jump in the Grand Prix classes this coming season. Hopefully, because of them, we will have a successful year,” he concluded.

Later in the afternoon, Jennifer Bliss of Wellington, FL rode Poker Face, owned by Harris Hill Farm, to top honors in the $15,000 USHJA International Hunter Derby. Second place went to Brent Balisky of Langley, BC and Easy Street, owned by Thunderbird Show Stables, completing their rounds with a final score of 175. Third place was awarded to Kris Killam of Naples, FL with Barbara Fishman’s Mr. Big, earning a 173 to finish their afternoon.

The combination mastered the track designed by Robbie McGregor of Wellington, FL and received an overall score of 176. Of her win, Bliss exclaimed, “I’m so excited. This horse is my long-time partner. I’ve had him for about six or seven years and I just love him to death. He’s been happy to get back in the ring and I’m happy to get back in the ring with him because I just love this horse so much.”

The pair was the first to achieve victory in the new “Hunt and Go” format, in which competitors complete a classic hunter round and then immediately begin their handy round. “I thought it was fun,” said Bliss in regard to the new format. “I think that it will certainly take a little bit of getting used to, but I did like trying it out. It really keeps things flowing.”

Kelly Mullen of Franklin, TN rode to the top of the leaderboard in the $5,000 USHJA National Hunter Derby, aboard Fortuny, owned by Warioto Farms Inc. The pair rode to a first round score of 88 and returned for the handy, where they earned a total score of 175.5 and first place honors. Second place went to Jennifer Bliss and Sugarman, owned by Harris Hill Farm, LLC, after the duo completed their rounds with an overall score of 174. Third place was captured by Devin Seek of Ocala, FL aboard Emo Stables’ Attila with a two round score of 169.