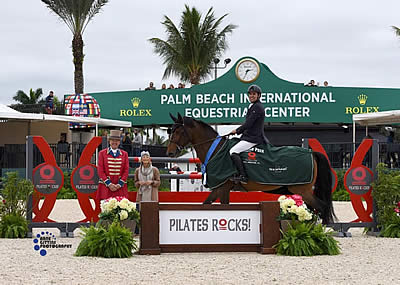 Wellington, FL – November 19, 2019 – Last weekend, the ESP Fall Series came to a conclusion with the ESP Pre-Charity show held from November 15-17 at the main grounds of Palm Beach International Equestrian Center. Santiago Lambre of Mexico secured the blue ribbon of Sunday’s $25,000 Pilates Rocks Grand Prix aboard his exceptional mount, Doloris, after completing the jump-off in 44.862 seconds. Hector Florentino of the Dominican Republic and Carjo Z, owned by Scott Head, flew through the timers in just 44.875 seconds with four faults to claim second place. Rounding out the top three champions was Theo Genn of Lebanon, OH with Chaccomo 11, owned by Bridlebourne Stables, LLC, once they stopped the clock at 47.812 seconds with four faults.

Sunday’s feature class was designed by Hector Loyola. A total of 23 pairs contested the first track, while only four competitors returned for the jump-off. “I think only four clear [riders] is a good number for how many were in the class total,” Lambre commented after his win. “And the course was quite technical this week, especially that last line, so I think that’s what got several horses with the rails. The footing feels really good, and it was a great improvement for the horses ahead of the winter season.”

Lambre won this weekend’s feature class with his 2008 Dutch Warmblood mare, Doloris, who had great success this summer season: “This year she has won everything! In Tryon, New York, Michigan, she’s always competitive and has been going really well the last few months.” The popular pair will continue to reside in Wellington, FL through the ESP Holiday Series and into the new year for the 2020 Winter Equestrian Festival.

On Friday, the $10,000 Pilates Rocks 1.40m Open Stake was bested by Mark Bluman of Colombia and his mount Arcange De L’arc after completing the jump-off in 42.229 seconds. Taking second place was Santiago Lambre of Mexico aboard his Doloris with a 44.084-second jump-off. Todd Minikus of Lake Worth, FL rode his Juju VDM to a third-place finish after completing the jump-off in 48.332 seconds.