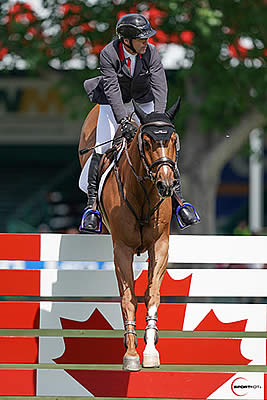 Calgary, Alberta – It was an emotional victory for Canada’s Eric Lamaze in the $500,000 RBC Grand Prix of Canada, presented by Rolex, on Saturday, June 8, at the Spruce Meadows ‘National’ tournament in Calgary, AB.

In his first competition since publicly revealing that he has been battling a brain tumour for the past year and a half, Lamaze scored one of the most meaningful wins of his career.  Riding Chacco Kid, Lamaze topped a seven-horse jump-off in dramatic fashion.  Jumping clear in a time of 46.25 seconds, Lamaze moved into the lead with two riders to follow.  2018 World Cup Champion Beezie Madden of the U.S. had the time, 44.62 seconds, with Coach but a rail down at the final Rolex fence dropped her to fourth in the final standings.  The reigning World Cup Champion and one of Lamaze’s closest friends, Steve Guerdat of Switzerland, was the final challenger and looked on target with Albfuehren’s Bianca, but when the clock stopped in 46.96 seconds, the victory went to Lamaze.

“I didn’t get up this morning thinking this was possible,” said an emotional Lamaze, 51. “It shows what a good horse can do for you.  When you don’t have the fight in you, they fight for you.  It’s one the victories I will cherish forever.”

The all-time leading money winner at Spruce Meadows with more than $6 million in career earnings, Lamaze last won the Grand Prix title at the ‘National’ tournament in 2010 riding Hickstead.

“This is an ongoing battle for me and today is a gift,” said the 2008 Olympic Champion.  “With great support from Steve [Guerdat], my owners and clients, my staff, and people all around the world, you keep fighting and the dream came true.  With the great Hickstead was the last time I won this grand prix; he was looking out for me today.”

Lamaze has been partnered with his winning mount, Chacco Kid, a 13-year-old chestnut Oldenburg gelding (Chacco Blue x Come On), for the past three years.  The horse is owned by The Chacco Kid group consisting of Rick and Sara Mershad, Ludi and Carol Sollak, and Andy and Carlene Ziegler.

“It was his first real grand prix win in the International Ring,” said Lamaze of Chacco Kid.  “I’ve said it many times and I’ll say it again – I do believe Spruce Meadows makes horses.  Chacco Kid arrived here three years ago and he’s a better horse because of it.  I can’t say enough about this facility.  Spruce Meadows is a place to bring young students and see them grow, and to bring young horses and see them grow.  If you win a competition here, you can win anywhere in the world.”

Proud of his students and thankful for his friends and supporters, Lamaze had the biggest praise for his equine partners.

“This is our livelihood but we are very close to these animals and what they do for us,” said Lamaze, who is based in Brussels, Belgium.  “The horses are a big part of why I am here today.  I don’t know what level I will continue riding at as the year goes on but I know horses will always be a part of my life.  I want to keep riding and I will keep fighting every day to do this.  The horse is the greatest therapy you can have.”