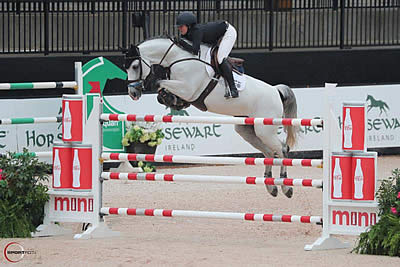 Course designer Kelvin Bywater (GBR) saw 29 entries test the first-round track, with five pairs returning for the jump-off round. Despite heavy rainfall over the past two days and intermittent rain throughout the class, Cruciotti reported that Hadja van Orshof, her own 2007 Belgian Warmblood mare (Cabrio van de Heffinck x Darco), had “one of the best rounds she’s ever jumped,” and won despite adding a stride:

“I actually didn’t know if I was going to show until I walked in the ring. I was going back and forth about it. I saw people going before me and I’m a chicken about any unusual circumstance, so I trusted my horse and tried to ride a smart round, but not do anything too risky,” Cruciotti explained. “I was fortunate to go at the end of the jump-off, so I could watch a few, and it looked like they were being efficient, and not too risky. I thought if I could be a little bit [less conservative] here and there I could get it, and she jumped amazing. I’m so happy with her. It actually was one of her best rounds she’s ever jumped – maybe she should jump more in the rain!”

Despite her speedy performance, besting a competitive field, Cruciotti admitted to adding a stride on course and elaborated that nine is a tricky number for her: “It’s a running joke since I was ten years old – for the life of me I cannot count nine [strides]. I can do eight, I can do ten or seven or 12, but not nine! And so I knew the line was nine, and my brain was like, ‘no, no, no, ten!'” she continued. “And the whole time I’m trying to tell myself to stop pulling, but luckily I was able to clean up the round somewhere else.”

Hadja van Orshof has been a project of Cruciotti’s for the past three years, and her “lionlike” braveness lends itself to the success they’ve achieved together, she emphasized. “When I got her she was very, very green jumping 1.45m, so we had to really take our time because she’s so careful. At the same time, she’s like a lion – she doesn’t think there’s anything she can’t do,” Cruciotti said. “Our partnership has grown through the years. I got to take her to the World Cup Finals this year in Gothenburg, and I feel like she and I both grew up a lot there. We were a little bit overfaced, but it made us a better horse-and-rider combination, and we learned to really dig down deep.”