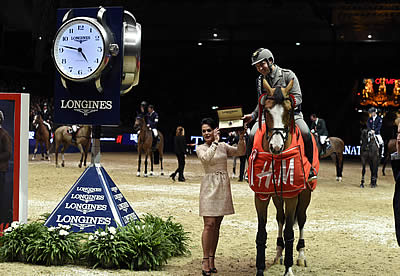 At one stage in the marathon 17-horse jump-off it looked as if the British were keeping their World Cup™ leg to themselves with Ben Maher on the feisty chestnut mare Diva ll, world number one Scott Brash (Hello M’lady) and Guy Williams (Titus) heading the leaderboard.

But the Italian police officer blew them out of the water with his ambitious round, shaving 0.95 secs off Ben’s time. The remaining riders – Germany’s Marco Kutscher and Hans-Dieter Dreher, Britain’s Laura Renwick, Switzerland’s Steve Guerdat and Ireland’s Bertram Allen – couldn’t get close and it all came down to the last rider, Britain’s Michael Whitaker on Viking.

The packed house roared Michael down to the final fence, but he had struggled to get a good stride to either the third or fourth fences and, despite his desperate efforts, he finished just 0.13 secs slower than Ben to slot into third place.

‘I don’t think the course was too easy,’ said Michael, commenting on the large number through to the jump-off. ‘In fact, it was quite difficult. It’s just that everyone had really prepared their horses well and had been saving them for this class plus the standard is now very high.’

Portuguese course-designer, Bernardo Costa Cabral, admitted that the course was ‘difficult to build for these superstars.’ He commented: ‘Achieving a balance is a thin line. It wasn’t the highest track but it obviously rode tougher than it walked. However, it resulted in a brilliant jump-off.’

‘Emanuele certainly spoiled our party,’ joked Ben, ‘but I don’t think I could have done any more. My horse did everything for me – it felt like coming down to the last at Cheltenham! I’ve been a bit short of horse power this year, but she has always come forward for me when it matters and I won’t forget that.’

‘And I love my horse,’ declared Emanuele of the 10-year-old by Padinus that he has owned since a two-year-old. ‘He is clever and careful. I tried my best and it was good! I particularly chose to come here to try to qualify for the World Cup because I love this show, so to win here is great.’

Emanuele is now looking good for the Longines FEI World Cup™ Final at Gothenburg, Sweden, in March; his win has propelled him from 42nd to 13th in the rankings which are headed by Germany’s Christian Ahlmann.

The FEI’s World Cup Director John Roche congratulated Olympic Director Simon Brooks-Ward and his team on an outstanding show. ‘It’s a great surface, horses love to jump in this environment and riders have the best crowd in the world behind him,’ added Ben Maher. ‘This is why it’s my favourite show.’