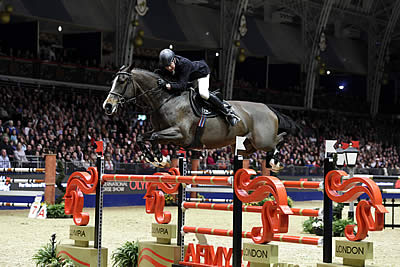 John Whitaker, the most senior rider at Olympia, The London International Horse Show, showed his younger rivals a clean pair of heels in the H&M Ivy Stakes when, despite an unpromisingly early draw in a 12-horse jump-off, he set a target none could match.

This hugely popular victory, which had friends backstage rushing to pat him on the back, put John back at the top of the H&M Leading Rider of Show leaderboard, which he heads by just one point from Ben Maher.

‘My real aim was the World Cup class this afternoon [won by Italian Emanuele Gaudiano], which didn’t quite work out, but here I am back on top of the world,’ said John, who turned 60 this summer. ‘The crowd are always really behind you at Olympia and it brings everything out in you.’

His winning mount was Team Harmony and former FEI President Princess Haya’s bay mare, Ornellaia, who he suggests could be a contender for Rio – which would be John’s fifth Olympic Games.

‘All you can do is try to be professional,’ he said, explaining his longevity at the top of the sport. ‘I get up at 6.30am every morning and school horses, trying to improve all the time. You have to keep upping your game, even at my age. This year has been a good one and to finish with a win at Olympia means a lot to me.’

Christmas came early for 11-year-old Alex Finney, a member of the Iveagh branch of the Pony Club, when she paired up with William Whitaker to win the H&M Pony Club Mini-Major. It was a first trip to Olympia for the young Irish rider and her pony, Ballyknock Master Roan.

‘Alex did a fantastic round which captured the win,’ commented William. ‘She showed experience beyond her years.’

There was more high-octane pony action in the H&M Mistletoe Mini Stakes. Oliver Tuff showed that he has inherited his show jumping father Justin’s competitive genes when, on his first appearance at Olympia, the 12-year-old from Totnes, Devon, won with Mandy Hall’s Show Me Again.

The fiercely competitive class culminated in a seven-pony jump-off. Oliver was third to go and, with a series of expertly executed turns, he pinched the lead from Claudia Moore (Peppino II Grande) by over two seconds.

‘Coming down to the last fence with everyone screaming and cheering for you really is amazing,’ said Oliver. ‘Competing here is magical and the atmosphere is electric, and winning has made it extra special.’