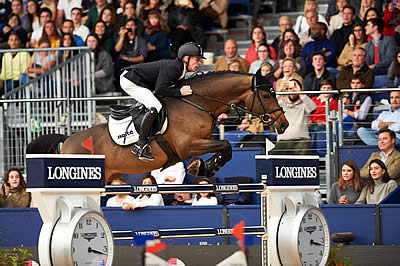 He was chasing the target set by Rio 2016 Olympic team gold medallist Kevin Staut and the 11-year-old Dutch-bred gelding Aran, and runner-up finishing spot was no great disappointment for the 36-year-old Frenchman, as it launched him to the top of the League leaderboard ahead of the next round of the series in La Coruna (ESP) next month. Third place went to 30-year-old Briton, Scott Brash with Hello M’Lady, while German legend and 1993 FEI World Cup™ champion, 53-year-old Ludger Beerbaum, slotted into fourth with Casello.

In contrast to some of the previous legs this season, Spanish course designer Javier Trenor managed to keep the jump-off numbers under control, with the very narrow top plank on the final element of the triple combination proving the undoing of many in the first round.

Against the clock, however, it was the penultimate FEI World Cup™ branded vertical that was the real influencer, Henrik von Eckermann (SWE) and Mary Lou demolishing it before Tobias Meyer’s (GER) mare, Cathleen, ducked out at it. Fourth to go, Beerbaum was clear but when Staut shaved almost four seconds off his time then Ehning knew what he had to do, even if it didn’t quite go to plan. “I didn’t have a good shot to the vertical (second-last) so I knew I had to make that turn if I wanted to win!” he explained, after taking what seemed like an impossible line inside fence three on his way to the last, to stop the clock in the winning time of 43.56 seconds.

Thrilled with the performance of Comme Il Faut whose cat-like jumping technique drew gasps of delight from the crowd in both rounds, Ehning said, “He has famous parents (Cornet Obolensky/Ratina Z) and he’s an incredible horse; you can see he is clever and careful and he did a super job in the jump-off – I’m really proud of him!”

Marcus Ehning GER (1st), talking about his jump-off round: “You always have to have a plan A, but today I had to use Plan B!”

Scott Brash GBR (3rd), talking about his plans for getting to the 2016/2017 FEI World Cup™ Jumping Final: “At the rate I’m going we will have to see if that’s even possible! It has taken quite a while to get some points but I’m very happy with my horse. She was out for much of the outdoor season so it’s great to have her back now in top level sport.”

Javier Trenor ESP, Course Designer: “I was happy with the course and the results in general at the show this week were good. I was happy with the time-allowed for first round (68 seconds) – there were nine riders clear and I always aim to get between eight and twelve, just one rider with a time fault, so that’s good as well.”

Marcus Ehning GER (1st), talking about his plans for the remainder of the Longines FEI World Cup™ Jumping season: “I’m quite relaxed. I have plenty of good horses and I have two more shows this year. My goal is to get to the Final, but there is no pressure.”