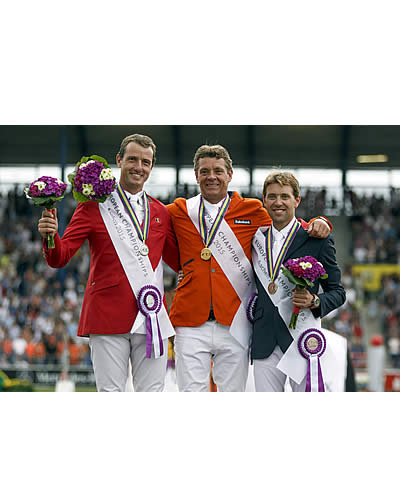 Aachen (GER), 23 August 2015 – Dutch dominance in the sport of Jumping continued at its relentless pace when reigning world champion, Jeroen Dubbeldam, steered the brilliant SFN Zenith to victory in the individual final at the FEI European Jumping Championships 2015 in Aachen (GER) today. Silver went to Belgium’s Gregory Wathelet with Conrad de Hus while Simon Delestre and Ryan des Hayettes from France claimed the bronze in a two-round competition that kept spectators in the packed Soers Arena on the edges of their seats.

Dubbeldam now has the big three in the bag – Olympic individual gold claimed at Sydney 2000, the world championship title he took at the Alltech FEI World Equestrian Games™ in Normandy (FR) last year and now the individual European title which has not been won by The Netherlands since Johan Heins stood top of the podium in Vienna (AUT) back in 1977. And he has achieved each of the last two victories after already contributing to team gold with the same brilliant gelding.

Today’s final began without Ukraine’s Cassio Rivetti whose horse, Vivant, did not pass yesterday’s second horse inspection. That saw Dubbeldam move up from third to silver medal spot, and he was only just over one penalty-point behind the leading partnership of Spain’s Sergio Alvarez Moya and Carlo as the first round began this afternoon.

Frank Rothenberger’s first track proved very difficult indeed, with only five keeping a clean sheet from the world-class start-list of 25. Big, wide oxers were the order of the day, but it was the line from the open water at fence six to the following triple combination that presented the greatest difficulty, and more than half of the faults recorded racked up at this point on the 12-fence course. Amongst its victims were Meredith Michaels-Beerbaum and Fibonacci, the breath-taking grey clipping the second element of the obstacle which consisted of two verticals with planks on top, followed by an oxer.

But while the German rider dropped down the leaderboard, the two men who preceded her rocketed in the other direction when both Andreas Schou (Lenardo der Kleine) from Denmark and Simon Delestre (Ryan des Hayettes) from France were foot-perfect all the way.

Wathelet also put himself in the picture when doing likewise with Conrad de Hus, but the host nation’s hopes were shaken again when, lying sixth, Ludger Beerbaum’s mare, Chiara, put a foot in the open water in an otherwise clean tour of the course. A mistake at the second fence blotted Dutchman Jur Vrieling’s copybook, the bogey triple combination penalised Peneleope Leprevost from France and two fences down saw Switzerland’s Romain Duguet disappear from the reckoning, so the leaderboard kept changing rapidly.

There would be no mistakes from Dubbeldam and Zenith, however, and when overnight leaders, Alvarez Moya and Carlo, left the first element of the triple combination on the ground, the Dutchman was already in the driving seat going into the second round with less than a fence in hand over Wathelet in second, with Alvarez Moya in third, Delestre in fourth and Schou in fifth place.

The new 10-fence course was less complicated, and eight of the 22 remaining combinations completed on a zero score this time out. Schou’s medal hopes disintegrated with a single error, however, but Delestre was ultra-careful with his 10-year-old gelding and, bringing him home with a just a single time-fault on the board, he was suddenly in a threatening position. So when Alvarez Moya left a pole on the ground the Frenchman already had bronze in his grasp.

Second-placed Wathelet held his nerve to pile the pressure on Dubbeldam with a foot-perfect run, but the Dutchman never looked like flinching. His horse was reluctant to come into the ring today, unsettled by the noise and atmosphere during the week, but once the fences were in front of him he just got on with the job he does so well, and as the Dutch pair galloped through the finish there was a single time penalty on the board but it made no difference to the final result. A roar of approval from the knowledgeable Aachen crowd accompanied the victory-gallop of the most exceptional horse-and-rider combination in the modern sport.

“You can only dream that it comes true; there is no wisdom for it,” said the newly-crowned Rolex European Jumping champion this evening. Dubbeldam admitted that he was very aware of the high expectations for himself and his horse coming into this event. “When you come here to Aachen, one of the most difficult places for a championship and one of the nicest, you know it’s going to be a top battle. So many good riders and so many good horses. And you also need to be a little bit lucky. Everything has to be good, you have to be fit, your horse has to be fit, and then you can focus on everything, but in the end you need some luck. I had the luck on my side, and today it is a dream come true.”

Wathelet said: “I prepared to bring my horse here as best I can and he improved a lot. In the last two months he’s been jumping better and better and he went particularly well in Dinard (France) so I had a good feeling coming here – but I never expected a medal! Then I was eighth before the final today and I thought that if I could go double-clear then I might just get a medal. My horse really fought for me this week.”

“I was in 14th place; it was really big stuff and I wasn’t expecting anything big!” Delestre said. “But when I was double-clear then I finished in the top three. I’m really happy with my horse and to have three French riders finishing in the top 10 was just fantastic!” the bronze medallist said.

The crowning of the Jumping champion Jeroen Dubbeldam was the final sporting moment in Aachen today, but it was FEI President, Ingmar de Vos, who had the final words to bring the super-exciting FEI European Championships Aachen 2015 to a close this evening.

“With 117 years’ experience of presenting equestrian sport, Aachen is no stranger to events of the scale of the FEI European Championships,” he said. “In this equestrian heartland, our athletes – equine and human – have been given a five-star welcome with the great professionalism that they are known for. Over the past 12 days, Aachen has once again shown its amazing ability to organise a multi-discipline event and make it look so easy.

“Thirty nations competed in Aachen and battled it out for 13 gold medals and to qualify for the next Olympic Games in Rio. My sincere thanks go to Carl Meulenbergh and his employees, my dear friend Frank Kemperman and the City of Aachen, the organisers and the host of these important European Championships. You have written a further glamourous chapter in the history of equestrian sport.”

Jeroen Dubbeldam is only the second Dutch rider to win the individual title in the 58-year history of the FEI European Jumping Championships.

The previous Dutch winner was Johann Heins who reigned supreme in Vienna, Austria in 1977.

25 horse-and-rider combinations started in the first final round today, but only 5 jumped clear.

22 horse-and-rider combinations started in today’s second round, in which 8 jumped clears.

Jeroen Dubbeldam NED, talking about Zenith’s hesitancy in going into the arena today: “It is not easy for our horses in a place like Aachen. I went in after Meredith (Michaels-Beerbaum, Germany) the other day and the stadium exploded and my horse also exploded too. It happens. We saw this last week with Edward Gal in the Dressage, his horse was upset in the prizegiving and the next day he had the same problems. You can’t ask the crowd to be quiet; I love that (noise of the crowd) but there must be some way to make it easier (to blend) enthusiasm and horsemanship.”

Jeroen Dubbeldam NED: “A group of people bought Zenith for me. I saw him at a young horse show in Hagen and I stayed in touch with the horse and our Dutch fund bought him for me as a seven-year-old.”

Gregory Wathelet BEL: “After the team competition (when Belgium didn’t qualify for the second round), I was really disappointed but I did my best to concentrate and I thought that I could still go on and do something special if I got my chance.”