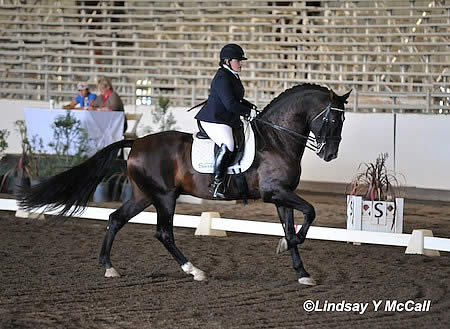 Susan Treabess and the Pura Raza Espanol horse Kamiakin impressed the FEI Ground Jury, scoring a 67.421% in Grade IV at their first international competition. Treabess noted, “This was his fourth horse show with us and first time in the FEI ring. Friday was a good start; I rode a conservative test resulting in a smooth first run. I am getting back into competition, I was off for an entire year; this is a new horse, a young horse, and an inexperienced horse. Now that we know we could get a solid score on a conservative test, we will try and push him a little bit more. As a ride he is quite straightforward. He has a solid mind, is dependable, and has great accuracy. We really didn’t know where this horse was going to land. I have been out of showing for a year, I am not fit, I had a baby, I am adjusting to motherhood and I have had to go through this phase of life and figure out how to get back in and be competitive. Now it’s time for me to go home, get my butt kicked, and raise the money to get to WEG.”

Treabess worked with Denny Callin of Holland during the Golden State Dressage Classic. As a notable trainer of many top dressage athletes, Callin has the experience and knowledge of working with both able-bodied high-performance riders and Para-Dressage riders. Almost 10 years ago, Callin approached Treabess to interest her in becoming more involved with Para-Dressage. With some assistance from him and Ellen Eckstein they got Treabess her first 2010 WEG horse Money Penny.

Treabess added, “Denny is a super coach. He lives in Europe and understands the quality of Para-Dressage horses in Europe. In the U.S. there is a fundamental weakness in the understanding of what a true Para-Dressage horse looks like and rides like. Coaching is also important. I am lazy unless someone is behind me pushing me. I am looking forward to working with Callin the rest of the week. He has been very generous with his time and commitment to me. As for the future we are working on not only qualifying for the 2014 WEG but developing Kam in the able-bodied world. Kamiakin is owned by Kathryn Hill Aalsmeer.

As an able-bodied young rider Peavy has started making a name for herself. With the move to Para-Dressage she has already qualified for the 2014 WEG Selection Trials. On Friday, Angela Peavy and Leandro (USA) made their Para-Dressage debut scoring the top Grade III position with a 63.684%. Following Angela for second place was two-time Paralympian and 2010 World Equestrian Games (WEG) rider Barbara Grassmyer aboard Mibis (USA).

Sixteen-year-old Peavy, from Avon, Conn., is partially paralyzed on her left side due to a blood clot that occurred before birth. With the move to Para-Dressage, Peavy bought a new horse from David Marcus in Florida and has plans to work with Heather Blitz in Massachusetts when she returns from this CPEDI3*. Peavy expressed, “I have never competed at a CPEDI3* so I didn’t know what to expect. It was very exciting and nerve wracking. This is only our second show together and we earned our qualifying score.”

She continued, “Our ride went fairly well on Friday. Leandro is a very calm, loving, easy-going horse. He is a workout to ride but he loves to please. I want to thank my parents for this opportunity, my past trainer Anne Guptill for getting me this far, David Marcus for Leandro, and Tanya Vik who has been training me in California.”

For questions about the 2013-2014 Para-Equestrian Dressage season, please contact the USEF High Performance Director of the Para-Equestrian Discipline Laureen K. Johnson at (908) 326-1155 or e-mail lkjohnson@usef.org.

For more questions about Para-Equestrian Dressage, please contact Hope Hand at Hope@uspea.org or (610) 356-6481.

One of the highlights of this show is the competition for the best presentation at the “jog”. Awards are typically given for:

All athlete/horse combinations must have attained (as a combination) a minimum 60% score attributed by the Ground Jury in a Team test or Individual Championship test one time.

Minimum of 3 FEI PE5* or 4* judges of different nationalities