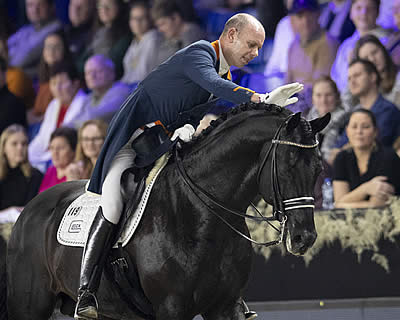 Glock’s Dream Boy NOP lived up to his name when carrying 2016 champion Hans Peter Minderhoud (45) from The Netherlands to victory at the seventh leg of the FEI Dressage World Cup™ 2018/2019 Western European League in Mechelen, Belgium.

At just 10 years of age, this young stallion is demonstrating colossal potential, and his score of 83.665 pinned 2013 series winner Helen Langehanenberg (36) from Germany and Damsey FRH into second, while the super-exciting Portuguese partnership of Maria Caetano (32) and Coroado strutted their way into third.

The final five all produced stunning performances, with Sweden’s Therese Nilshagen (35) finishing fourth with Dante Weltino OLD despite some miscommunications early in their test, and Ireland’s Judy Reynolds (37) making a great comeback with Vancouver K to line up in fifth place.

Mechelen was also making a welcome come-back this week after a few years’ absence from the FEI Dressage World Cup™ circuit. So just before the prizegiving ceremony was perfect timing for an emotional farewell tribute to Tiamo, the 18-year-old gelding that carried Belgium’s Jorinde Verwimp to many great moments and who finished eighth on their very last outing together.

Minderhoud’s win is another milestone in the rapid progression being made by his still quite inexperienced young horse, who won the Grand Prix and finished third in the Freestyle at Olympia, London (GBR) just before Christmas. “He only did a few Grand Prix competitions before qualifying for Tryon (FEI World Equestrian Games) this year – it was a bit early for him in his career, so after that I gave him a long rest and then restarted at Olympia. That wasn’t the most easy show for him to come back to, and I was not so happy with how he felt… he had been going so well at home. But then I bring him to another show here in Mechelen ten days later and he is super – I mean super!” said the delighted Dutchman.

“Here he was much more focused, not like at Olympia where I had to survive it a little! Today I could ride to the point, and he was really trying for me!” — Hans Peter Minderhoud (NED)

Caetano and her adorable grey Lusitano, Coroado, set a whole new standard when posting 80.160 when fifth last to go of the 15 starters. At the fourth leg of the Western European League in Madrid (ESP) last month they scored 77.655 for third place, but things didn’t go to plan at Olympia where their mark of 73.900 left them well down the line. There’s something really special about this pair who have sprung to prominence recently, however, and they both looked radiant after showing the most fabulous passage and piaffe, and a great sense of harmony, during their wonderful performance.

Langehanenberg bettered that when scoring 82.880 despite testing the nerve of Judge at C, Belgium’s Jacques van Daele, as she powered to a very late halt. And although Reynolds and her 16-year-old gelding didn’t challenge for the top spot, their new routine to a wonderful compilation of traditional Irish music had the spectators’ toes tapping and put 78.570 on the board.

Nilshagen’s chances were hampered when her horse dropped the contact early in their test, but with a degree of difficulty of 10 and the stallion’s breathtaking extended canter, they clawed it back to put 80.090 on the board. So Minderhoud was chasing Langehanenberg’s leading score as he set off, last to go, and Dream Boy didn’t let him down. He’s a horse that’s growing in confidence all the time, and after winning the Grand Prix he was always the one to beat.

“He’s a very sweet horse, and because he’s seen all the things that approved stallions see at a young age, he’s not really spooky or anything. In the beginning I felt he went into himself a bit in big arenas, but yesterday and today he was much happier.” — Hans Peter Minderhoud (NED)

With just three more qualifiers to go in the Western European League, the next port of call is on Minderhoud’s home turf in the Dutch capital city of Amsterdam at the end of January. Having moved up to joint-third on the leaderboard, he’s looking forward to getting to the 2019 Final next April in Gothenburg, Sweden, which is where he won the coveted FEI Dressage World Cup™ title two years ago.